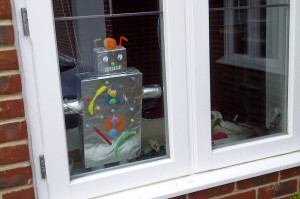 Every day starts out the same: my comforter and sheets are soaked from night sweats, and pushing them off feels like what I imagine lifting a car would be like. “Drug sleep” redefines what I used to know as slumber, but then the effects of my medication seem to be redefining so much more than I’d expected that it’s not surprising that something as simple and natural as sleep should become a different experience. Disorienting. I fall asleep without the gentle nod of the Sandman—I’m just down for the count, unconscious. Then I’m suddenly awake, soaking wet, pinned down by two tons of bedcovers.

Waking up doesn’t exist—I’m just awake. Not alert, not marshmallow- headed, just middle-of-the-day awake…at 7am. Shower, breakfast, medication, all by rote. Like a programmed automaton following its morning protocol. I sit down to write and forget that the morning ever existed, that I was ever asleep, that I am sitting down to write—it’s all clear and sharply focused, but on nothing. Nothing at all. There is a distinct lack of something human in my actions. It feels akin to depression—and it may well be—but if it is, I don’t get to feel it. No grief, no sorrow, just the emptiness of being a zombie on a treadmill, marching steadily toward nothing, no goal, no ending, no happy, no cookie. Nothing. It’s supposed to be better than living with my symptoms, but I’m not certain about that. I consider that life with highs and lows, life with thoughts and actions had something more to offer. All I have now is my art, and I’m worried that I may be losing that, too. Pleasure seems to be missing.

So where’s the tradeoff? How is my medicated life supposed to be superior to my life with symptoms of schizophrenia? I can feel them scratching at the back of my brain, the paranoia, the fear and anxiety. Occasionally a voice might cut through the wall of robotics to annoy me with some asinine pronouncement or cruel jibe. In eight short weeks I’ve been forced into the experience of compartmentalizing, of attachments and boundaries, experiences and concepts which I used to struggle with because I couldn’t comprehend them. Now it seems as if I’ve had to learn a new language and pass for native in under two months time because drugs. Yay. Again, disorienting. What might take a normal person their lifetime to learn, I’m picking up at the accelerated rate of a high-end droid. And for what, I wonder? To be the B-movie monster from the late night double feature? It’s Alive! It Walks Among Us! The Schizophrenic From Beyond the Ward!

I jest, but I really do feel more alienated as a sedate person because my reactions and responses to everyday stimuli seem so appallingly flat to me now. This can’t be the way that so-called normal people live, so numbed to the world around them. How would anything ever get done? I can live with the night sweats, I know how to do laundry, but is life really meant to be so lackluster, so purposeless?

I understand that over time my meds and I will find a cohesion that feels balanced, but how can that really be predicted? If every human being is different, and those of us with distinctly different wiring are given compounds to short change the symptom banks, how reliable is the outcome? The sleep is new to me, but so is the dullness. I’m no longer afraid of people, I don’t get flustered or go into confusion at the grocery store, reading paperwork doesn’t boggle my mind, but I still live with the effects of schizophrenia, the micro-short working memory, the echolalia, the overt social awkwardness. These well-worn components of my life are still there, I just don’t—or can’t—respond to them in the same way. Did I mention disorienting? It’s not as if my memory of my lifetime was replaced by better working circuitry. I can remember the dark times, the terror, the urgency to react to panic, the suicidal thoughts. They’re like stories now, someone else’s story, but somehow mine nonetheless.

I’m told to be patient, and I’ll take that under advisement. The positives have outweighed the negatives thus far, so I find a glimmer of hope in the structured life I’m living since my hospitalization. But the lack of joy, the sense that something is missing—those thoughts won’t leave. When I try to consider my future as a medicated man, I ponder a love life, a family, the possibilities that might have not been mine before, and I find hope. On the other hand, if I’m going to continue to live underneath this car and wake up to the weight of a somnambulist’s twilight, how will I ever find myself? I’m here, I just don’t have the map.