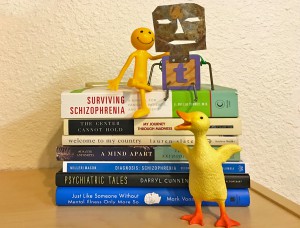 To put things into perspective, it’s been twelve weeks since my last breakdown. That’s eighty-four days since I was admitted to the psych ward, seventy-two since I was discharged. Just a little over ten weeks of being on my own in the New World of a daily anti-psychotic/depression/anxiety medications cocktail. To put it mildly, I’m still adjusting. This is not a game for the impatient.

People ask me if I’m feeling better. They don’t ask me how it feels to be dealing with the effects of being medicated. I get smiles from well-intended individuals who have no idea what I was going through or what it feels like to have survived it, and if they were to inquire, and if I were going to answer, again, not for the impatient. It’s a lot to process and I’m in the middle of it.

First off, how do I draw a comparison for you? I’d have to begin by telling you what it’s like to have schizophrenia. Which means I’d need to have the experience of not having schizophrenia in order to explain the symptoms from the outside. A bit like asking a fish if it knows what it’s like to live underwater; the fish has no point of reference, being that it’s never lived on dry land. It’s born into the water and lives there all its fishy life. So I attempt to draw a picture of a mind trapped in psychosis for the larger symptomatic view, and break it down into smaller, basic components for the day-to-day living. I have to use metaphors because actually describing how I feel or what I experience would be metaphysically absurd. The well- meaning person would have to listen to seeming gibberish as I spoke about sounds being generated from nothing, thoughts which only correspond to experiential data and not to a specific reference point, and the chemistry of panic and depression running simultaneously like equal pulls from a water faucet, and now we’re back to the fish.

In my experience, when it comes to schizophrenia most people only know movie and television stereotypes. They’ve seen the crazed killer on the loose from the insane asylum, the comic book lunatic scribbling nonsense on their dorm room walls, or the mad professor with a penchant for over-explaining obtuse theories. In common, each has an imaginary friend or receives conspiracy information from the Beyond, and eventually men in white coats take them away in a straightjacket, kicking and screaming while being hoisted into the ambulance. They’re characters from films and plays, a script writer’s imagination enacted by a sane person, directed by a filmmaker with a feel for the macabre. These are characterizations based on the viewer’s worst fears of loosing control, of loosing friends and families and all that’s precious. There’s also a kernel of the social bias that the crazy person is in control of their madness, another stigma-induced prejudice thrown in for extra measure which is less than slowly shifting toward a more realistic understanding of the disease. Did I mention patience?

The tool I use is research. I start with myself as the subject and follow the breadcrumbs. For example, my therapist is a solid sounding board—I can discuss my feelings as colors, sounds, interpretations of interconnected minutia, and go from there. She has a professional comprehension of my disorder and can suggest to me ideas which are in line with my internal dialogue. I can talk with her about the voices I hear and we can use another language to describe them as “audio hallucinations”. I can go online or to the bookstore and research articles on the subject to get a deeper understanding of where people like myself have been before concerning said voices. I can talk with a friend who has symptoms in common and ask how they deal with them. My psychiatrist can prescribe medications meant to balance my chemical states when they’re askew. I can educate myself, participate in groups, and share my ideas openly with a trusted friend. It doesn’t ensure that I won’t have to deal with the symptoms of my disorder; it means that I have a fighting chance of surviving them.

Back to the question of how I’m feeling. Well, it’s not like having the flu and getting past the barfing stage. It’s not like having a sports injury and, after enough rest and ibuprofen, getting back into the game. It’s more like being from another planet and trying to assimilate the culture and customs of the native population of an uncharted solar system on the head of a pin. While spinning plates overhead on a stick. And dancing on a high-wire without a net. I’m feeling different from that day when I broke down and lost contact with what everyone around me knows as reality. I recognize myself as being worth not dying at my own hand. But I’m currently living without joy, and that, I understand, is something else which I’ll need to relearn. Not the “without” part, but the “with”. My psychiatrist assures me that this drug-induced anhedonia will fade with time.