Advocate from the Inside Out

Since 1949, May has been celebrated as National Mental Health Awareness Month, the purpose of which is to inform the general public of mental illnesses like anxiety, bipolar disorder, depression, PTSD and schizophrenia. In 1946, President Harry S. Truman and the 79th United States Congress put into effect the National Mental Health Act in response to the number of WWII veterans dealing with mental health issues, not just from the stress of wartime duties, but as a response to war in general. The veterans also provided the National Institute of Mental Health with a cross section of the general population of America at that time.

Fast-forward sixty-seven years and we’re already two weeks into what, for our stigma-busting community, should be a time of true activism. It’s the opportune moment to reach out to your families, friends, and community in ways that suit you best. For me, that’s upping the number of texts and calls I put out to my friends who live with their own diagnoses, as well as those who support me on my path to management of my own. I have to let my regimen do its job and help me rise above those feelings of inadequacy, the ever-present social awkwardness that self-stigma insinuates, and any other concerns that haunt me from back when I didn’t understand that it wasn’t the rest of the world that was out of balance with itself.

I don’t take my mental health management lightly. Since I received my diagnosis in 2010, I’ve been voraciously soaking up any and all information about what’s had ahold of my brain and behavior. I had to change lenses and refocus my viewpoints on self-care, diet, exercise, and medicine. That’s a lot to ask of a person with a thought disorder, especially given that trust is a term which doesn’t ride so easily on this journey.

It took me six years to finally accept the necessity for drugs in my life. It took a second failed suicide attempt to wake me up to the pain of restraints, both physical and emotional. I still feel the pinch, the discomfort of loneliness, the helpless and violated feeling of stigma, but that doesn’t stop me from considering alternatives that work. After self-medicating with alcohol, or white-knuckling it through every bout of psychosis or anxiety, I finally surrendered to the expertise of the doctors and psychiatric professionals who’d seen the ravaging effects of schizophrenia on countless other patients. I had to trust, against my instincts not to, that they had my best interests in mind. They brought mental health awareness to me—no mean feat considering my paranoia.

Besides taking the best care of myself that I can, sharing that awareness with others—both those living with mental health issues, and those who love them—actually helps me stay in the saddle. I use the tools at my disposal: experience, strength, and hope. Those of us who’ve been down these roads are the ones who’s voices should be heard first—we’re in the unique position of having something to share from the inside out. By initiating the conversation we can bring attention to the many facets of the feelings we deal with, none of which would be anything close to ordinary for a “normal” person—or for those with visible illnesses and conditions—but are daily occurrences for us. Shame, stigma, derision, dismissiveness—the unhealthy and damaging mindsets which would benefit most from a month dedicated to mental health awareness—all need to be corrected. 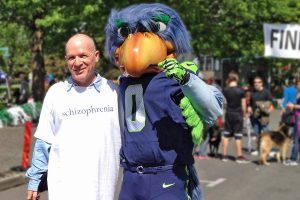 How often have I heard “You don’t look crazy to me” from someone, well- intended or not? Just how am I supposed to “look”? This stereotype has been around since Shakespeare penned King Lear’s Poor Tom in his redundant clothing—multiple layers of mismatched gear—and word salad ramblings about Flibbertigibbet, ratsbane and porridge, sketching up a lively picture of a wretch in need of psychiatric care. Newsflash: I’ve been there. I spent years sleeping under coats and newspapers, ate little to nothing, lived on coffee and cigarettes, and suffered the slings and arrows of outrageously bad fortune, all the while never being taken seriously with regards to my mental health because I was an artist, an eccentric, “quirky”. I was caught in the grasp of madness in a world with little to no awareness of it whatsoever. At least today there’s a silver lining. At least we can bring change to mind.

So for me, these are a glorious thirty-one days, this month of May. It is a time when brave souls everywhere can and should take up the mantle and, through public displays of solidarity, cry out: “I’m in here and I’m real! I have a mental illness and I matter!