Imagine talking freely, having an open conversation about your diagnosis, your medications, the side effects, your therapist, psychiatrist, or counselor. Sounds like a dream come true, right? I experienced that today on the 2016 NAMI Walk here in my hometown. Not only did I have those conversations with my friends, two of whom live with bipolar disorder, but people all around us were sharing conversations like ours for the hour that we walked the three mile loop. I never felt awkward. In fact, it was liberating, especially to hear complete strangers divulging what would normally be considered private information in polite society. The only downside that I could detect was later, in perspective: why can’t those discussions be held outside of the advocacy and charity functions? Our culture is willing to discuss other medical problems without shame. Granted, any conversation thrives when it’s taking place amongst a group of like-minded individuals, but wouldn’t it be healthier for everyone all around if we felt free to open up about our disorders and illnesses without feeling guilty or uncomfortable? I think it’s entirely possible that the day will come when mental health issues aren’t having to fight for space in the conversation. We are moving forward, it’s true, but we’re far from being a stigma free country.

When I hear a person say that we’re being too sensitive I wonder if that’s just an excuse for their being derisive. When they say that we’re looking too hard for something to complain about, maybe what’s happening is that they’re clueless about the stigma surrounding mental illness. Or maybe they’re afraid that it’s “catching”. They will defend their “right” to dismiss the mentally ill community and continue to do so unless we rally together as a segment of the population who deserve to be heard. That’s on us. It’s one thing to talk about being stigma-free; it’s another to face the bullies and the ill-informed. Ignorance is a challenging foe.

When I speak about mental health, I like to be grounded, meaning that I need to make sure that I’m working my program of medication and talk therapy, keeping in touch with my psychiatrist and PCP, and generally tending to my mental health without getting hung up on the downsides, of which there are plenty, as we all know. Side-effects from meds and difficult topics in therapy aren’t likely talking points that come up when someone’s discussing their day-to-day physical wellness and whole person approach; that’s just not an issue when you’re being told to eat a balanced diet and get plenty of fresh air and exercise. Why should it be any different when it comes to the health of our minds? Why is stigma still so prevalent in our society? I’m thinking it comes down to fear and laziness, same as any other social prejudice matter.

When I first started writing for BringChange2Mind, I wrote about the way that public shaming occurs in everyday speech with phrases like “tinfoil hat”, which I still find appalling when I hear it in the news or read it online in reference to an individual dealing with a thought disorder. The spectrum for any mental illness can include so many variables that it’s ludicrous to box a person in with an offhand remark. I’m often one to ask people to mind what they say because words can hurt.

For example, a person is not “so OCD” because they lined their shoes up in the closet. That’s just being tidy. The weather isn’t “so schizophrenic” because the weather doesn’t experience mental fragmentation. It’s wind and clouds. No one’s “having a panic attack” because their favorite song is on the radio. That’s called “exuberance”. And holding your ground when people say stuff like this isn’t being “too sensitive”. I won’t advocate fighting or arguing, but if you have a way into the conversation to bring to their attention that you take offense because you deal with the symptoms they’re using as the basis for humor, perhaps they’ll understand. It’s hit and miss, admittedly, but most of the time, in my experience, if you approach discrimination from a positive perspective, people will listen. 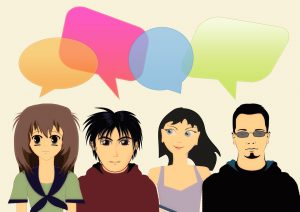 What we say and how we say it isn’t just about talking in the safety of our friends who agree with us. It’s about putting ourselves out there when the time is right, when the situation will benefit from it. So go eat something healthy, take a nice walk, and keep those conversations alive. The future of change is in our hands.