As of this entry, I have been blogging for Bring Change 2 Mind for three years, and I couldn’t be happier about that. It is an honor to be sharing my story with the readers and subscribers who regularly fight the stigma and discrimination surrounding mental illness. That I am in the position to contribute to the stream of life in a manner that befits my abilities is something that I am grateful for.

My current circumstances are no cakewalk. My finances are dwindling and my housing situation is dubious. Living with schizophrenia means that having a traditional nine-to-five job is not likely for me. Since my diagnosis in 2010 I have had to leave that world, not because I can’t work, per se, but because the unpredictability of my disorder preempts the kind of employment that others often take for granted. Even medicated I have had to accept that the symptoms which define my illness can, and occasionally do, find their way to the surface. Just last week I heard disembodied voices while at a dinner party for a friend’s graduation. In an environment like that I am typically anxious, and a recent side effect of my antipsychotic medication is an increase in anxiety. Little surprises, like hearing voices when I haven’t for a while, can throw me off balance. I may have trouble with social awkwardness, but I’m learning to navigate that with the help of additional meds.

For three years I’ve written about schizophrenia with a focus on raising awareness about the disorder, especially for people unfamiliar with it. I’ve wanted to put a face on my illness which makes it more approachable. I have challenged conventional images of schizophrenia in order to render the offhand labeling moot. I’ve dedicated certain blogs to various symptoms and the ups and downs of learning what’s happening to me, all the while keeping an eye on staying current with my readers so as to make an honest connection, one that informs and draws a sense of unity and comfort.

When I’ve had to work through the labyrinth of the social and health services departments, I’ve brought you along with me. When I’ve been maligned or mocked, I’ve shared that with you, too. When self-stigma has dug its way into my day and undermined my best intentions, I’ve been transparent about that for the benefit of anyone going through something similar. When I gain insights into my disorder, I share them so that caregivers and family members can find hope where there might have been confusion or frustration. I want to belong to a culture that accepts a person living with a mental illness for who they are rather than opting for stereotypes. Those hackneyed institutions need to be challenged, and who better to do that than us, the people with the diagnoses? We have a voice. Let’s use it.

I still experience examples of stigma every day. Recently, while waiting at a crosswalk on the way to my therapy appointment, I saw a woman across the street shouting, “Get out of my way,” seemingly to anyone around her. Or perhaps to no one. It wasn’t clear. She had an oversized bag of popcorn which she gestured with in between outbursts. She was wearing an ill- fitting pink track suit with Sanrio characters on it, but looked “normal” in all other respects.

Waiting next to me were two young women who, after witnessing the yeller, spun their fingers at their temples and sang in unison a two syllable word they’d broken into thirds for comic effect: “Cuh-RAY-zee!” after which they broke into peals of laughter while pointing at the woman. To some that might not seem like a display of prejudicial behavior, but substitute a racial or gender biased slur and think again. Could they get away with it? Would they even consider it? I’d be inclined to say no, they would not—and that’s just a minor example of what we deal with in the everyday world of dismissiveness: the perpetuation of derogatory profiling for puerile entertainment.

I did not, however, confront the two girls, nor did I shame them for their unkindness. There’s no point in that. Instead, I chose to write about it here, to share a detail from daily life with a wider audience. In truth, I have been that person, yelling at the air when my symptoms decided it was time to go big. It’s not “acting out”—there’s no choice in the matter—nor is it necessarily controllable in the moment. It’s an immediate response to a subjective reality that doesn’t line up with the status quo. But it certainly doesn’t warrant being called out with cruelty; the self-stigma later is humiliation enough. Trying to explain it to one’s therapist, best friend, family member, or psychiatrist hurts more than the jeering of two jackals at a crosswalk.

The way I see it, it’s our duty to one another to share our stories in order to create more and stronger solidarity, and to help relieve some of the pain that hurt feelings can bring. This blog has afforded me that option, and through it I have found my voice, the real voice of me, not the ones that tell me to harm myself, or the ones tumbling out of rude people’s mouths. I recognize that not everyone is so fortunate, and that writing this blog is a privilege, but I’m also aware that there are many ways in which each of us can let the world know who we are and how we feel. We aren’t going away just because they’re embarrassed to have us around in our eccentric clothing, shouting at invisible friends. 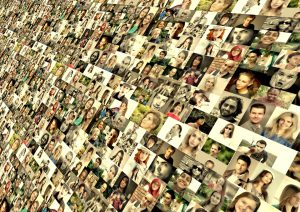 We are survivors. We deal with some pretty heavy stuff. And we come out on top in ways that the public may not understand or appreciate. We have to acknowledge the hard work. We want recognition for our accomplishments, great or small. Sometimes it’s just getting out of bed, or making a successful effort in therapy. Other times it’s getting the shopping done. One of us earns a degree or lands a new job. Someone has a gallery showing, while another feeds the dog. Real lives lived because we matter. Positive results that we need to highlight. That’s true pride. That’s us.

We’re not in this alone. It’s our job to learn everything we can about our diagnoses, maintain our mental health, and then offer support to one another. From there we can join together through our shared stories, create an ongoing conversation, and build a saner scene for ourselves in the immediate future, and for coming generations as well. Our combined experience, strength, and hope can help bring change to mind, and isn’t that the point? Call me crazy, but I’m a believer. We’re a strong community. Anything is possible.