“What do you mean you have depression? You just won nationals!” by Kristle Lowell 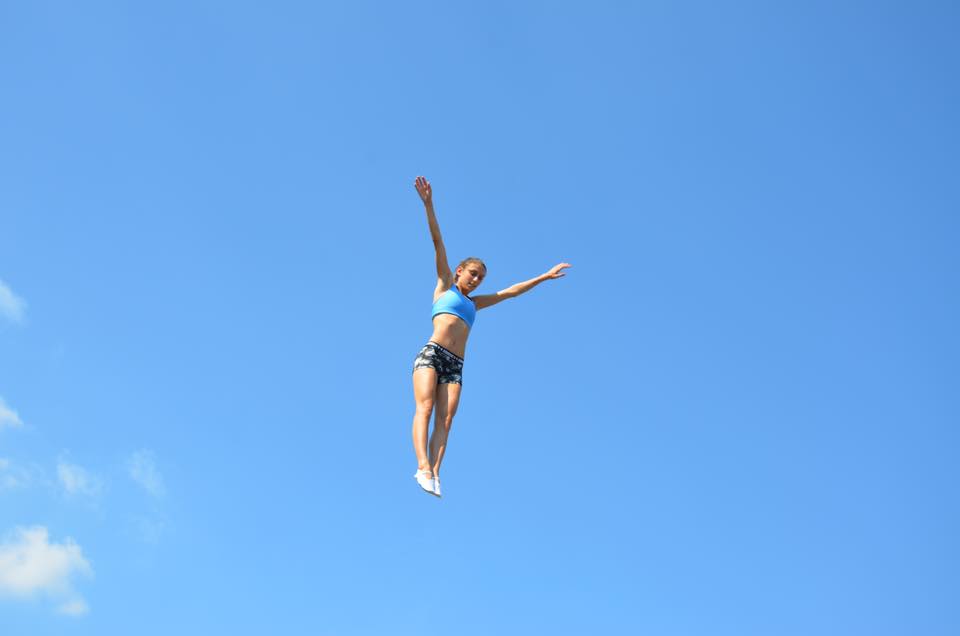 When people see me, they see an athlete capable of flipping through the air and performing on a world stage. But, behind all the glitter and rhinestones is a pain that very few people see.

Part of my depression is suffering from crying spells. Everyone handles stress differently. Some listen to music. Others meditate. I cry.

The biggest relief from my depression came when I stopped lying about it. Depression was a secret I kept for too long. I think it was crushing me to not talk about it. I was denying a part of myself for so long. I felt an incredible relief when I won nationals and someone came up to me and said, “So, you think you still have depression?”

It’s like someone being gay. Just because they win a medal doesn’t mean that changes. Relief came for me when I stopped getting mad at myself and started getting mad at how many people treat mental illness like it’s a choice.

I’ve found that, since coming out about my struggles with depression, the stigma can be overwhelming. Our society is so accepting of all races, religions, and LGBT. But, if you tell someone you struggle with depression, that same love and acceptance isn’t always there.

I feel that the public needs more education about those of us who suffer from depression. You don’t have to accept what were going through, but just don’t make it worse. At the end of the day, what I think about the most is the comments that people make in an attempt to help without realizing that they might be making someone’s depression worse.

“You have to have a reason for crying.”
“Stop acting this way.”
“You just have to think positively.”
“…but you seem so happy. You can’t have depression.”
“Choose to be happy.”
“…but you have nothing to be sad about in life.”
“It could be worse. You could have something physically wrong with you.”

Depression is not strep throat. You do not just beat it once and never have it again. It’s a daily struggle, and, for some, it can last a lifetime. It’s not an illness that people can see so it’s harder for people to understand. When someone breaks a bone and gets a cast, everyone runs over to sign their cast. When you tell someone that you have depression, they often run in the opposite direction. Some days, I wish there it were just a broken bone because then you would know that one day you will feel better. Telling someone not to be depressed is like telling a handicap person to just get up and walk.

Accepting that I suffer from depression is such a relief. I spent so long fighting it, and trying every therapy and every antidepressant. But, just being me has been more helpful then any treatment. I have accepted that I can do the sport that I love and brings me happiness and also suffer from depression. They are not mutually exclusive. For people who stigmatize depression, I have learned to just feel bad for them for not being accepting of someone just based on something completely out of that person’s control.

I hope that anyone reading this knows that there is hope. People say, “Don’t let depression define you.” But, maybe, sometimes that is okay. Depression does define who I am and its become part of my identity. Society is so eager to fix us. To me, God gave me depression for a reason. Maybe it’s so I can feel more deeply or just really appreciate the few true moments of pure happiness. Not every person with depression needs to be fixed. They just need to be loved for who they are. I try to live my life with the idea that kindness costs you nothing and meanness can cost you everything. Kindness and understanding helped me more then any pill ever could. I have hope that, one day, depression will be as accepted as LGBT. Some days, I feel as if the stigma of depression hurts worse then actual depression. Lifting the stigma helps people to not feel ashamed to talk about it and get help. Being called crazy is never fun. It hurts to my core. Depression is never fun, but the most dangerous weapon depression carries is the culture of silence.

I look back in history at how many wonderful people have suffered from depression. Edgar Allen Poe suffered with depression and turned it into something beautiful. Touching peoples lives with the written word and the ability to describe emotions with words that makes the reader feel something. Abraham Lincoln suffered with depression as well. He was so attuned to the suffering around him that he put into motion the movement that ended slavery. I think people with depression know what it’s like to be in pain and want to help others around them to not feel that way. Robin Williams was such an incredible actor and made so many people happy with his comedy. I hope that I can use my depression to my advantage on day like these great people. It’s such a stigma to have depression but google “famous people in history with depression”. Where would we be without these people? People with depression have so much to offer and I am proud to be “coming out” as someone who suffers with depression. I have embraced the fact that, even though I never asked for this life, it’s the hand I have been dealt and I’m going to make the best of it.