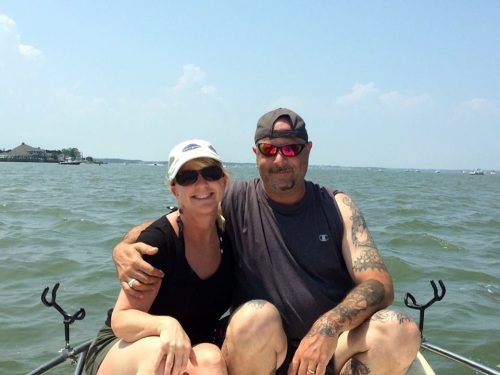 I lived my 10’s,20’s and early 30’s without professional help or a diagnosis. I couldn’t stay with a job or mate long enough to get any insurance or financial footing. I believe if I was able to get the help I needed, my life would’ve turned out much more fulfilling and prosperous.

My childhood was horrible and my parents already had two other kids before me. My older brother and sister. I was left to my own devices as a child with no money or guidance, only other friends with the same situation.

It turns out that I was in my own world with my own rules at a very young age. Then, when things changed and I moved away from my mom and her abusive (new) husband, to Maryland with my father and his new wife, my rules still applied.

Life in high school was great, compared to my childhood, then came the drugs! I apparently am also an addictive personality, so that went out of control quickly. I knew something was out of balance with me and I couldn’t seem to get ANY help at all.

My father was in the Navy years earlier and pushed for me to get in. I got in after being discharged from an earlier four year commitment! I got arrested in O.C. MD. for public intoxication on my 18th birthday ,no less! My recruiter worked me onto an aircraft carrier (Abraham Lincoln CVN-72) as an airman on the flight deck for a two year commitment.

Boot camp was miserable and cold! I went to Great Lakes near Chicago in the winter and froze my ass off for eight weeks of hell and physical torture. Of course it all made sense later why they treat you so crappy. We ended up in the Persian Gulf the summer of 1992. Into a hot hellhole of a place, Sadam lit the oil refineries on fire and turned the sky black as night. When we got there, the sea snakes were all over the place along with an endless line of sharks! Needless to say, the trip there was no picnic,either. We worked 24/7 all week and weekend to launch our jets to drop ordinance on somebody then try to land on this floating airport. I got in trouble a lot and met the Captain under bad circumstances many times. Eventually, I got kicked out for smoking Marijuana and was living in California in an apartment with my H.S. girlfriend. We ended up coming back to Md. and things just kept getting worse and worse. My girlfriend and I split up after my D.U.I. i COULDN’T SEEM TO KEEP FROM SCREWING UP MY LIFE!

I eventually moved to Fl. where I grew up and started Tattooing for a biker (Outlaws) and the drugs got worse. I am an artist, so I figured it would come natural to me. I was struggling to keep a job outside of Tattooing and eventually disappeared to S.F. CA., again! I started my cycle again and had an incredible time in the city at a Hostel I eventually ended up working for at night check in man. Of course more drugs and alcohol to an extreme level. It’s some miracle that I made it this far, considering the amount and variety of drugs in S.F. I ended up back in Md., staying with my sister. I eventually settled down in a drinking city ,the same one I got arrested at 18, with my new girl. We’ve been together since 98′ and she’s been the difference in my life. I finally got on an insurance plan and it paid off. I was having the same problems, of course, and went to an awesome Pysch. who diagnosed me Bi-polar and got me on the proper meds. It took a while to get the correct mix of pills, but we eventually got it right.

My life has improved since I got on a program to help me with this unbelievably difficult disease. Although, I have had troubles with substances and ended up in a rehabilitation facility for a pain program after I ended up addicted to pain killers and Cocaine last year. This year has been extremely difficult and still need help.

This disease (both of them) has ruined my opportunities in life, but I’m still here and am not quitting the fight to just survive.

I wish our society would help more, rather than just lock up people with mental disorders.