“Don’t tell them you hear voices. They won’t understand. They don’t believe in the spiritual,” my mother whispered in my ear as she hugged me tight. Those were her last words to me before she left me at the mental health center after I had attempted suicide. I was just sixteen years old.

I was afraid too, so afraid.

I did hear voices.

In the darkest moments of my depression they would come — terrible and taunting whispers, calling my name, telling me over and over “You are going to die.” Though they were whispers they were insidious and inescapable. My radio turned to the highest volume couldn’t drown them out and a pillow over my head could not muffle their sound.

My faith taught me these voices were demons, the forces of evil sent to torment, and I accepted this as true. I did not understand that these auditory hallucinations were a symptom of severe depression, rather I saw them as evidence that I was wicked. I did not see myself as someone with an illness, but as a moral failure.

So when my doctor asked me, “Do you hear voices?” I remembered my mother’s warning, looked at my feet, and shook my head no. I did not want be diagnosed with an illness when I believed that the reason I heard voices was that I was being punished for my sins.

And when my pastor came to visit and asked me, “How are you doing now?”

I looked at my hands and mumbled, “I’m fine now. Thank you.” I did not want to acknowledge how weak my faith was in the face of the torment I was living in.

I left the hospital with another set of medicines that didn’t touch the depression. Over the next four years the voices would leave for long periods when I was not depressed only to return as the depression returned. Mercifully, these hallucinations were not an all the time thing for me. They were rare, but intense and terrifying– often driving me to hurt myself.

Then gradually as I learned to live without harming or starving myself, my depression became milder, and I never heard voices like that again. It was once I had stopped hearing voices for a few months that I connected how the voices came only when I was severely depression. I stopped blaming myself and refused to consider the voices I had heard as a sign of spiritual failure.

But I kept lying about how I was to my doctors and my pastors.

I kept up my pattern of not admitting when I was feeling depressed, of hiding my illness, of not disclosing my symptoms even when asked directly. I kept saying, “I’m okay,” even when I was not okay because I did not trust that doctors would respond to my mental health concerns with empathy. I felt ashamed of admitting when I was not coping with stress and emotions effectively and I was afraid they would judge me or push me to try another medication. In church I did not trust that my pastors would respond with belief in the validity of my illness. I was afraid they would blame me.

Ultimately I lied about my condition because knew the labels that often come along with admitting to seasons of depression, to fear of relapse into eating disorders, or to a history of auditory hallucinations. I did not want to be seen as weak— I wanted to be seen as strong and stable.

The problem is that lying left me to face an illness alone. If I had told the truth about the severity of my depression during my teenage years, there might or might not have been more effective treatments available to me; but there certainly would have been more emotional support available to me when I was experiencing auditory hallucinations.

It is hard to admit to the things we have been taught to feel shame about, but telling the truth is often the key to change. I no longer lie about mental illness or downplay my symptoms. I have come to a place where I allow myself to recognize the strength it takes to reject shame and reach out for help. 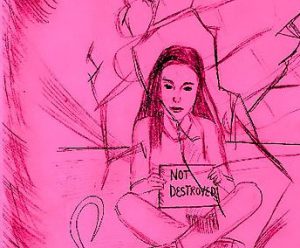 For so many years I lived sure of the fact that if people really knew the extent of my depression they would reject me, but when I finally opened up my experience was the complete opposite. Transparency about how mental illness affects me has brought into my life deep friendships. I know now that I am not alone and I do not have to face depression alone. When depression comes instead of feeling trapped in my own fear and shame I am surrounded by people who care about me, people who challenge me to keep reaching out.

So when I feel ashamed and I want to hide I tell myself, “Don’t let fear of stigma be what keeps you from telling the truth. Don’t live alone with mental illness. You matter to so many people. So many people want to help, but only you can tell them how.”

And I pick up my phone— and make a call— and tell the truth about mental illness.