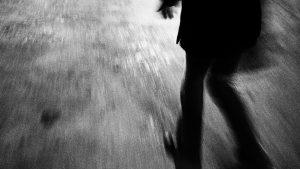 Walking home from the grocery, I saw a man having an animated conversation, his phone in one hand, the other gesturing in an irritated manner befitting his words.

“No. Listen to me. You’re having a panic attack. Calm down!”

It definitely caught my ear. I wanted to say something to him, but it was none of my business. I felt sorry for the person on the other end of the line, especially when he said, “Get over it.”

There was something in his tone that let me know that this was familiar territory for him, but his choice of words seemed born of frustration rather than compassion. I knew it wasn’t my place to judge, but if the person he was speaking to was going through a panic attack, the directives “calm down” and “get over it” were counterproductive and anything but supportive. I take one medication twice daily to keep my own anxiety in check, otherwise I’d be having major panic attacks four or five times a year. Trips to the ER always followed. It was no way to live, especially since, for me, panic more than often opened the door to psychosis.

Being told to calm down and get over it implies that the person experiencing the panic attack is doing so by choice, a common misconception in the day-to-day world, and a stigma that needs to be smashed. Between three and six million people in the U.S. struggle with some form of panic disorder. It can come at any age, but it most often begins in young adulthood, and often run in families. Some people may only experience one panic attack in their lifetime, while others may develop a disabling disorder if the symptoms go untreated.

Panic attacks mimic the symptoms of heart attack or stroke: chest pains, pounding heart, sweatiness, dizziness, feeling flushed or chilled, numb or tingling limbs, ringing in the ears, nausea, difficulty swallowing. There may be a sense of impending doom. The person may feel detached from themselves, or depersonalized. An acute fear of death may overcome them.

A panic attack may last from two to ten minutes, sometimes longer. They may come in waves, with bouts of anxiety in between. Panic attacks often come without warning. They may be accompanied by symptoms of depression.

In my case, my panic disorder went unchecked long enough that I developed agoraphobia, a debilitating disorder defined by symptoms of intense fear when being alone outside of the home, being in enclosed or open spaces, or using public transportation. I would have to have a friend come with me if I knew I had to ride in an elevator, and I would still break down regardless of their presence. If the bus got crowded, I would have difficulty breathing, break into a sweat, and get off at the next stop to wait for an emptier bus. Sometimes I would simply avoid going anywhere. Agoraphobia still haunts me, although my meds have helped somewhat.

So what about the person on the other end of that phone? If he or she were having a panic attack, how better could the sidewalk caller have handled the situation?

Start by encouraging them to breathe. Deep breathing can help combat the panic. Stay in the conversation with them. This lets them know they are not alone. Try to remind them that it’s temporary. If they’ve been here before, then they might remember that the effects are short-lived and that balance will return.

If you are physically with them, stay with them. Help them to focus on something else. Try to make them comfortable. Put them at ease. Reassure them. Do not dismiss them or their fears—this only serves to exacerbate the problem. Don’t patronize them. Treat the situation as you would a medical emergency, like a broken bone or a deep cut. The experience is very real to them; treating it as they see it is the best way to help. Listen supportively without pressuring them. A panic event is generally short; wait it out together. If the symptoms do not subside within a reasonable amount of time, seek medical assistance. An ER physician will likely administer a medication to calm the heart and adrenaline in the person’s body.

When I’ve been caught in a panic attack, my mind can’t tell the difference between real or imagined danger. I believe it, so it’s real to me. It’s been a year since my last panic attack and I’m grateful for that. I have my worries like anyone else and I get anxious sometimes, but nothing pushes me over the edge into terror. Thanks to my treatment plan, I’m calmer and happier and I’m living without unnatural fear for the first time in years.