Transgender to Bipolar: My Spectrum of Stigma

Always feeling like odd man out is a common theme, I can only imagine. Whether we feel different because of our culture, our situation, our looks, our stature, our financial status or simply because of our feelings or views on life. Stigma works against the best of us, sometimes inarguably right up in our faces. Other times, more subtly, possibly just our association with another person presses the weight of stigma against us. Has society become insensitive to the effects stigma has on those who are on the side of the oppressed? Sometimes I feel that without stigma, there would be no progress.

If being transgender was as accepted as simply having blue eyes or brown hair, would my journey have been different? Of course it would have. I don’t speak for anybody else’s experience. But I think so far, it has made me stronger, bolder, more resilient. The fight against stigma is real. This fight is also helping define who I am and who the groups of people around me with similar experiences are. United against stigma, we are stronger. It doesn’t mean I don’t want a world without stigma. I do. It just means that for now, it is part of my journey.

I knew since I was a child I was different. I knew something was off on the inside. I had no concept of what being transgender was, nor bipolar, until my early 20s. But I knew there was rage, and there was conflict rising inside of me. And that was the first wave of stigma. I didn’t even know why I was different, but it was evident I was. I wrote it all off as long as I could to just being a young person. But the pain began to press harder and harder from the inside and I could not contain it.

Years went by. Massive shifts in moods and feelings. At 24 I was diagnosed with bipolar I. I still didn’t know exactly what that meant, but it made an instant connection with my suffering. It justified the 10 years prior to that of my life. I finally had an answer, a starting place to get better. For a moment, I was relieved. I had no concept of the stigma that was going to be associated with that diagnosis for the rest of my life.

Around the same time, I diagnosed myself as transgender. Another lightbulb moment that made all of life make sense in an instant. I again had justification for all the years of confusion and dysphoria. And again, little did I know, I was stepping into a life that would not only be a fight within myself anymore, but against me from outside forces. And so there I was, with two realizations that saved my life, and also began to tear me down like I never could have imagined. This is where my spectrum of stigma began.

I put my focus on bipolar on a back burner, not understanding the responsibilities I had to take care of myself yet. Eagerly beginning my transition took center stage. But I could not hide that I was transgender like I could hide being bipolar. It was an instant disclosure of my personal life every time I left my house. My heart raced and my stomach literally dropped as I walked outside of my front door. Down the streets of San Francisco. Through crowds. And public bathrooms — I didn’t use them for years. Imagine, being denied the simple physical right to use a restroom without being physically removed from it by authorities, reported to police, laughed at, yelled at, stared at. That was only the beginning of the stigma. There were horrible things said to me by complete strangers during those years that I still cannot bring myself to repeat to anybody, ever.

As I continued to transition, I began to “pass”. And strangely, I began to feel guilty about it. People stopped staring, stopped taking a second glance. I was no longer facing the same stigma that others were in my community since I could “blend in.” While it was a relief, I felt as if I wasn’t carrying the burden as I should for a community on the whole. So I began to channel my activism in other ways by being open about being trans, volunteering in organizations, helping others, attending events. It was my next level of fighting the stigma against gender identity.

And so here I am. Back on the front lines of fighting the stigma against mental illness. At one time, I hid being bipolar in order to live through my physical transition. And now that I have gone through that journey, I can stand up strong, I can fight the stigma against both of these injustices. I am a natural survivor and fighter. But it is not easy. I know that this simple blog post itself, outing myself as both transgender and bipolar will ultimately lead people I know, even family, to turn their backs to me. People I don’t even know will hate me just for being me. I have personally experienced it many times in my life. But its ok this time. I am ok with who I am now. I am finally ready to stand up and fight, with no regrets. 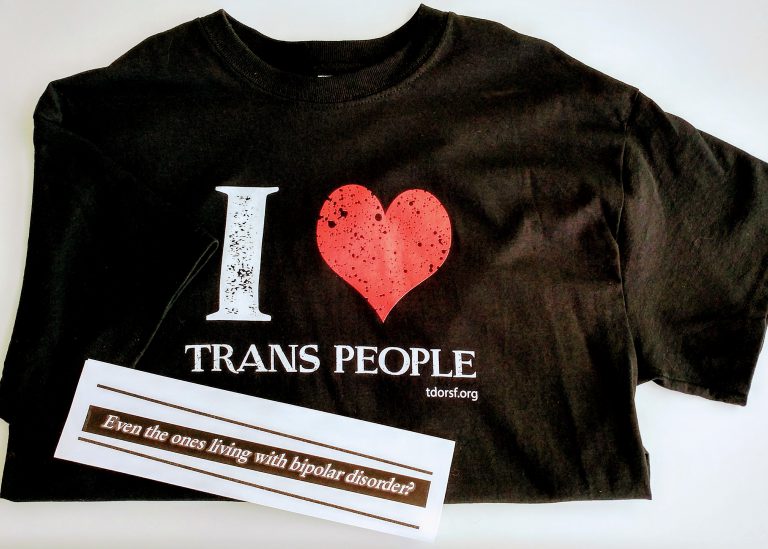