Finding My Way Back

The rain was punishing. It was the heaviest rainfall in years, and I was in it all three days, racing up and down streets I’d known since teen-hood, all but forgotten as I ran, rain-blind, wet and muddy from falling. Repeatedly. My hands and knees took the brunt of it until a rockery stopped my fall, face first, cutting my eyes and forehead, the dull ache of concussion blocking my senses. Caught in the dual grips of delusion and fear, I lay there, bleeding in the mud, terrified that The End had come and I couldn’t save the ones I loved.

Three months before, I had voluntarily committed myself due to suicidal ideation. I had gone so far as to research ways to kill myself, and was beginning to make plans. While in the hospital, I made one attempt: I wrapped a bath towel around my neck and tied it off, blocking my windpipe. I failed to complete the attempt, however; I couldn’t get a tight enough noose. I told the lead nurse about my attempt. I was put on a twenty-four hour watch to protect myself from myself. It was a wise decision.

I was medicated appropriately. In the confines of the hospital, the cocktail felt warm and cozy. After I was discharged and back home, my housemate and I drew up a chart of the various pills and times when they should be taken. I tried to follow it, but the more medicine I took, the more I felt my world slipping away. I would stumble around the house like a drunken man. I fell in the kitchen. I fell down the stairs. These signs should have been enough to warrant some action, but my housemates and I were at a loss, having never dealt with a medication overdose. Through no fault of my own, or the hospital’s, I was in jeopardy. Data shows that either taking too much medication, or abruptly stopping one’s meds, can result in or exacerbate psychosis. I had become a living statistic.

In the midst of this maelstrom I moved into a new apartment, a tiny one bedroom in a quiet neighborhood. I continued to take my meds as prescribed, but my paranoia had gotten too severe and I stopped. I fled my apartment to battle imaginary demons. Voices commanded me to trudge through the night, off my meds and hurting for it. The police were looking for me — I was a missing person. My friends found me after the rockery had cracked open my face. A neighbor had come to sit with me while I awaited a ride to the hospital. An MRI and three days in the ER, and I was beginning to come around, but there were no beds available in town, an all too familiar scenario.

The state had a room at a mental hospital some forty miles north of my home. They eased me out of the fog of my psychotic episode and helped stabilize me enough to deal with my schizophrenia. My doctor got me on a new regimen of meds. I was safe and adjusting. It was the right choice.

For the month, I ambled about with a walker to correct my balance issues. After discharge, I would walk with a cane. My doctor checked in with me frequently to assess my situation. Staff would do the same, visiting me throughout the day to ask questions about my stay, how I related to the group, if I was hearing voices or suffering any intrusive thoughts. These one-on-one moments helped me focus on getting better after my descent into madness.

The staff on our wing had their work cut out for them, with twenty-four patients to attend to. Community therapy concentrated on setting and achieving goals. Occupational therapy focused on creatively integrating right- and left-brained processes. Twenty-four individual viewpoints on life; twenty-four souls needing to communicate, each in their own unique way. A microcosm of the very world we longed to be a part of, treating one another with respect when someone went off the rails, supporting one another when life’s lessons got too hard to shoulder alone.

When all is said and done, isn’t that what all of us want, to be understood and loved? Those of us living with mental illness can feel discouraged and caged by stigma, but as I experienced it, there is a key to unlock that cell, and that key is faith — faith in one’s self, belief in a better day, and the conviction that life goes on and we can be a part of it. 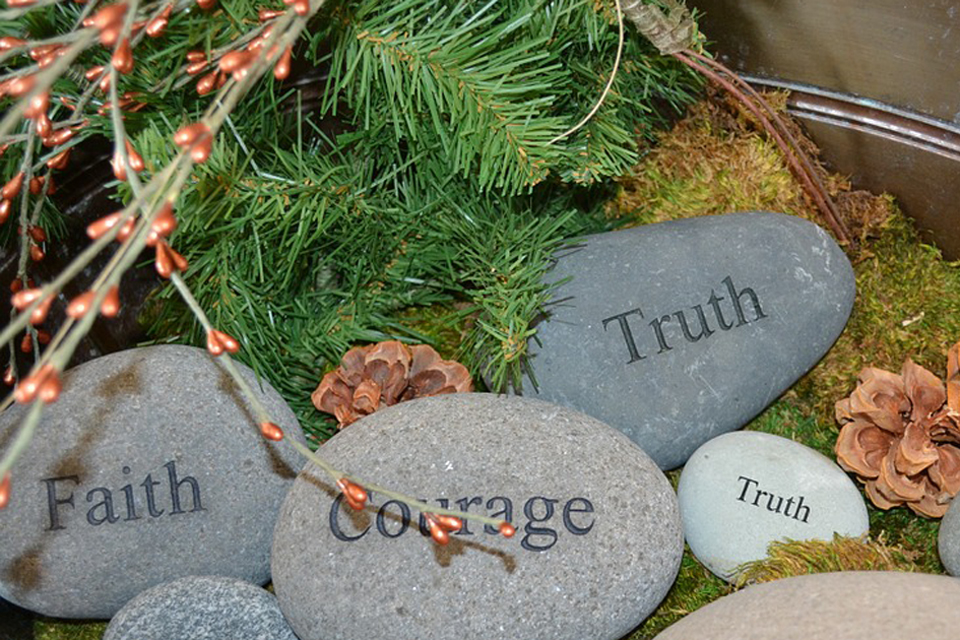