Families of those suffering from brain disease often do so in silence. I lost my 22-year-old son last year after he turned to street drugs to numb the symptoms of depression and anxiety. In order to give life to his memory and meaning to his life, I started Alex’s Dragonfly Revolution to break down the stigma and change the words to brain disease. This is Alex’s story, my story and what I’m learning is a reflection of the story of millions of families. It is also a mother’s journey to healing by finding a voice and a purpose after loss.

One year ago today, I lost a piece of my heart and a piece of my soul that I will never recover after my son Alex died. While that day will always remain raw and while I cry grief-stricken tears today, my journey over the last year and Alex’s struggle with mental health have changed me forever. Part of my path to healing is telling his story and mine.

Watching a loved one suffer from mental illness is one of the most frustrating, angering, and helpless experiences. The fact that it is most often done in secret makes the struggle nearly impossible. Although I did everything I could to provide him with support and connect him to medical providers, his care was never consistent and I made mistakes, spending time wanting to shake my son “out of it”, telling him to “buck up” and reinforcing negative messages in a desperate attempt to change anything. I know there are so many parents, siblings, friends and loved ones out there feeling the same sense of frustration and hopelessness. A tragedy changed me and I’m hoping by reading this story, it will change you too. 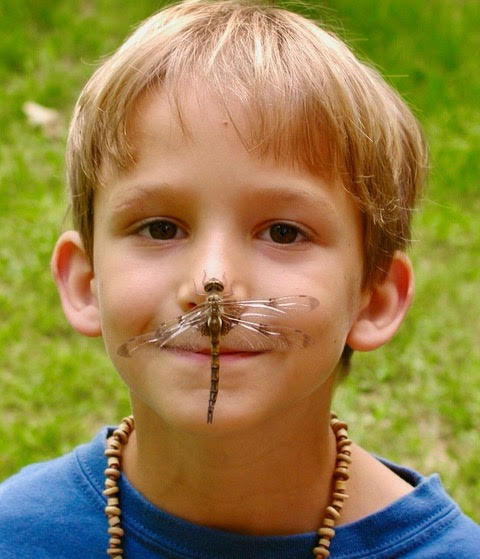 This is a picture of Alex, taken when he was around 5 years old. It captures the very essence of who he was – his smirk, his eyes, and his calm, sweet nature. He was so sweet that a dragonfly landed on his nose! This image has become the way anyone who knew him will forever remember him, even though it was taken 17 years before he died. And my circle of friends and family have showered me throughout this year with their own dragonfly sightings on airport floors, lamps in bars, garden pictures and emblems hanging from rear view mirrors – all in an effort to help remember and help me heal. Alex was brilliant and funny and quirky. A brown-eyed, blond-haired boy who loved engines and the outdoors. He carried that love throughout his life – camping, fishing, hiking, and riding motorcycles. But Alex struggled with anxiety and depression which came to a head in his junior year of college. As a family we did everything we could to help and support him but he believed, and the pressure from society reinforced his belief, that if he tried hard enough he could will it away.

After Alex was diagnosed with epilepsy in 2016, the struggle with his anxiety and depression became compounded. Balancing epilepsy treatments, with lifestyle changes, along with his depression and anxiety became an overwhelming battleground. We struggled to find a medical provider willing to manage all aspects of his health. And he changed. He was withdrawn and frustrated and often angry. And we, as a family, kept our struggles secret, magnifying the stress and helplessness we were already feeling. We worried about being judged. We worried about not having support. And I fought the despair that comes when we watch our children suffer and cannot help them. We worried Alex would seek out other ways to manage his pain, including drugs. We monitored him closely, provided support, encouraged him. Wept over his struggles. Wept over our own fear about his future and held him when he cried. I was his biggest champion and while I know he wanted me to believe that every idea could work, what I know now is that he got up every day and “tried to be normal” for me, not for him. Ultimately, our worst fears came true and Alex turned to street drugs only 2 weeks after passing a drug test, dying in his sleep after taking fentanyl. While I have shared this story privately, my post on facebook one week ago was the first time I have shared it publicly.

I was often asked after he died if I had any regrets. The answer is no. Like many people looking for answers to cure their loved ones from disease, I have hopes, dreams and wishes that we would have had more time to find the “cure” or a successful way to manage his disease. Time was not my friend, although I did everything I could to love, encourage, support, and find help for my son. I could no more cure his brain disease than I could cure him if he had cancer or heart disease. And my grief is no less than if he died of a more socially acceptable disease. What I’ve learned is that there is a stigma on mental illness and those who struggle from it. That there are families, like mine, burdened by the struggle who are suffering in silence and shame. That while we, as a society, throw our arms around those battling cancer by empathizing with a moving picture of a person going through chemotherapy or dependent upon oxygen, we do not feel the same empathy for those suffering from mental illness. And we are shocked when we learn of people who succumb to its deadly grasp. In the past years, we have added celebrities to the list of people who have lost their battle – Robin Williams, Kate Spade and Anthony Bourdain. And there are so many others like Alex out there. The theme is the same. We are surprised because we never knew. We never knew because we don’t know how to talk about it. We don’t talk about it because we are ashamed. By not talking about it, we feed the frustration. Let’s make a change together!

Look at Alex’s picture! This is the face of brain disease. He spent years battling its grip and it took away his opportunities, and hopes and dreams. I joined a club of grieving parents where, regardless of how we lost our child, our grief is profound and endless. I know that I need to try to make a change, a transformation, a dragonfly revolution to alter, as a starting point, how we look at mental health by calling it brain disease. I need help to spread awareness and open discussion, provide hope to those suffering and their families. To educate and encourage programs and funding. To teach us all to take a moment to look at the world a little bit more through our hearts and not just our eyes.