Is Perfectionism Anxiety in Disguise? by Amanda Stern

I’ve been speaking to audiences about my anxiety and taking questions about theirs while on tour for my memoir LITTLE PANIC. During the Q & A’s there’s inevitably one or two people who will state that while their child has anxiety, that’s not their issue. Their issue, they’ll tell me is perfectionism, defensiveness, or some other maladaptive trait. I listen, respond to whatever their question is—most likely one about their child’s anxiety, and then afterwards, I race to find these defensive perfectionists to talk to them. Because there are a few things I’ve learned having suffered from a panic disorder since I was a toddler, and it’s that anxiety, more often than not, begins with the parents, and something else—anxiety disguises itself in pretty innovative ways. Some of these ways include perfectionism, defensiveness, self-criticism and hypochondriasis. This is what I tell them, in the kindest most diplomatic way I know. The only tears shed have been ones of relief–Thank God.

As a child, I suffered from a panic disorder that went undiagnosed until I was 25. Because no one knew what was wrong with me, everything was wrong with me. Every symptom I displayed was labeled and classified as something else: learning disability, perfectionism, insecurity, processing disorders, hypochondriasis and on we go. I struggled with a self-criticism so intense I became trapped and stuck inside its horrifying whispers. It told me I was too hideous to be seen, too dumb to learn, too short to be taken seriously, too shameful to be friends with. I didn’t try because I feared being wrong would expose every hidden truth about who I feared I really was. The only thing I knew I was capable of doing was to mock myself before anyone else did. My defense mechanism was to be the school jester and to make redundant anyone else’s mockery of me. If they could laugh at me by laughing with me, then I was protected. Self-criticism as a child was a defensive way for me to protect myself against outside criticism, but as I grew it changed, and so did my perfectionism, and my hypochondriasis. Eventually all these traits outed themselves as being ciphers for one thing: anxiety.

Anxious people are terrified of uncertainty. Not knowing is an unbearable reality that tricks anxious people into thinking reality is unbearable–a false equivalency. Uncertainty to anxious people feels dangerous. It’s not exciting, it’s not a river of open possibility, it’s a noxious death trap. Therefore, making a mistake, handing in a project that has even one flaw, guessing at something when you’re not absolutely certain opens you up to uncertainty, and this is not a gamble an anxious person wants to take. At the same time, perfectionism is a guard against being wrong, because to be openly “wrong” opens up your interior world for scrutiny, and a perfectionist does not want anyone to look there and see anything out of order. A perfectionist equates performance with acceptability. They fear that if what they make or say or do isn’t perfect, you may stop liking them. Striving for perfectionism is a way that anxious people try and cope with their anxiety.

As I grew older my defensiveness changed; I went from making jokes at my own expense before anyone else did, to being overly sensitive about people thinking I was wrong or didn’t know as much as they did that I would push back. It’s taken me a very long time to recognize that I’m not a complete idiot. But, as a child, I was constantly IQ tested, and felt like I was a moron, and that sense stayed with me until I was in my thirties. I’ve worked hard to prove to myself that I’m halfway intelligent, but my maladaptive way of proving it to others is to treat anyone who seems to doubt me as though they were my past oppressors. I’ve spent my entire life criticizing myself and feeling criticized by others, and after working hard to overcome the damage, I am now overly sensitive to criticism of a very certain type—and it’s one that suggests that I don’t know as much as others. Still working on that. But people who defend against criticism are usually anxious people. Criticism makes people feel exposed, and when you are anxious, being exposed is terrifying. What will people see in you that you have been trying to hide? At the same time, defensiveness is a way of protecting yourself from feeling uncomfortable and negative feelings, feelings that push you into uncertain territory—the dangerous unknown, a place no anxious person wants to go.

Hypochondriasis is also a maladaptive way for anxious people to control their environment. I’m constantly scanning my body, trying to catch any ailment before it turns into something that might kill me. When I am actually sick or have a headache or I’m insanely tired and have to face the world, I am constantly announcing my ailments. This makes people think I’m hypochondriacal, or complaining, or even negative, but that’s not actually what’s happening. What’s happening is that I’m afraid of disappointing people, afraid that if I’m sick, I won’t meet their expectations, so I pre-empt their expectations by lowering them. I’m more comfortable living down to someone’s idea of me than of failing to live up to their idea of me. I’d rather not answer a question if I don’t know I’m right, help someone clean their kitchen when I don’t know where everything goes. I am so afraid of making a mistake that I announce in advance that I’m in a mistake-making state. That way, I can feel more comfortable getting something wrong without the fear of judgment. The truth is that no one except me expects me to be perfect. And this is confusing because I am more interested in truth and authenticity than I am in falseness and perfectionism is a type of façade. But I am anxious, and it went so long without being named that it grew and splintered and took on different shapes, making it even harder to recognize that all those shapes grew out of one core root—anxiety. 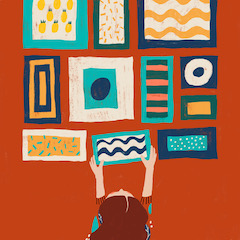