A Disease Of Loneliness

The word “schizophrenia”—coined in 1908 by the Swiss psychiatrist Eugen Bleuler—comes from a combination of two Greek words, skhizein and phrēn, meaning ‘split’ and ‘mind.’ Schizophrenia is a long-term mental disorder involving a breakdown in the relation between thought, emotion, and behavior, leading to faulty perception, inappropriate actions and feelings, withdrawal from reality and personal relationships into fantasy and delusion, and a sense of mental fragmentation. 1% of the world population (7.7 billion as of December 2019) is diagnosed with schizophrenia. Of the 329.45 million people in the US, approximately 1.2% have the disorder. In the ten years since receiving my diagnosis, I have met only two other schizophrenics. It’s a disease of loneliness.

It begins with the culture that surrounds us, the pervasive misconceptions regarding schizophrenia forming the bedrock of stigma against the individuals who live with the disorder. For example, when society tells you that every schizophrenic is violent by nature, it tends to color your impression of yourself even when statistics show the opposite is true. Listen to the armchair pundits describing the mentally ill person drooling and laughing hysterically, and see how long it takes for your self-esteem to tank. Imagine being told that this is what your life is like, that this is what you are like. Watch any number of movies featuring portrayals of schizophrenics and you’ll witness an interpretation of life with schizophrenia as horror fiction, the mentally ill person deranged and beyond hope. Given this depiction of schizophrenia, who would want that diagnosis? Certainly no one receiving it. The stigma informs your perception. This leads to feeling singled out which in turn leads to the aforementioned loneliness.

Schizophrenia is a thought disorder. I have lived with it for most of my life. Because of anosognosia—a symptom defined by a lack of insight into one’s condition—I never knew or believed that I was acting erratically or thinking irrationally. I had an illness that told me I didn’t have an illness. My behavior and thoughts seemed normal enough to me until I really got involved in the therapeutic relationship. Even then, I couldn’t see that I was experiencing life on a different plane. It took a few years to convince me. I sought out a second opinion. I took psychiatric evaluations and waited for the results to tell me that I was simply an artist and that I was otherwise normal. But it wasn’t true. I couldn’t accept that I was one of those sad, pathetic people from the movies. I knew better. I thought that everyone heard voices telling them to kill themselves.

In my senior year of college, I had a major psychotic break. I left school to live with a friend, a poet who traveled a lot. The old house we shared was frequently mine to rule. I lived at my desk in the attic where I’d painted the windows out. I lived like a vampire, in the darkness most days. I only felt serene in the dead of night. I would walk the city streets for hours, miles from my house, eating nothing and sleeping less. I was emaciated. I thought it was fashionable. In truth, I looked like a corpse.

I lived a life of delusion. I could still write in the haze of madness, but any semblance of reality melted away over the years that I lived in that dank attic space. Of real, lasting friendships I had none. All of my connections were surface only. I was afraid to be close because I was certain that people would steal my thoughts. I knew that aliens were walking among us. My behavior pushed my fiancée away. She moved to another city. I was left to live in that empty, derelict house. I tried to make sense of her being gone; I followed her to San Francisco. She would be marrying someone else. I broke down again within weeks of being there, alienated and alone, unaware that I was suffering the effects of schizophrenia.

When I returned to my home town I got a job playing Santa in a landmark location. In my padded suit and red clothing, I could be someone other than myself. Thoughts of monsters melted away. No one would steal Santa’s thoughts. I was immune to darkness. Being fully immersed in the persona of Saint Nick, I could exist without fear. But after work I had to ride home on a bus full of demons. Back to the attic. Back to the living nightmare.

To recap: schizophrenia is a thought disorder. Before therapy, psychiatric appointments, and anti-psychotic medications, I lacked insight into my situation. I would believe anything my imagination came up with. I drew correlations between totally unrelated concepts and events, and steadfastly defended my errant constructs. This is the nature of the disorder. It is not “acting out.” It is “acting in accordance with.” Just like anyone else. Except that the internal world is not in alignment with the common reality. It is a dream world for one. It is a disease of loneliness. 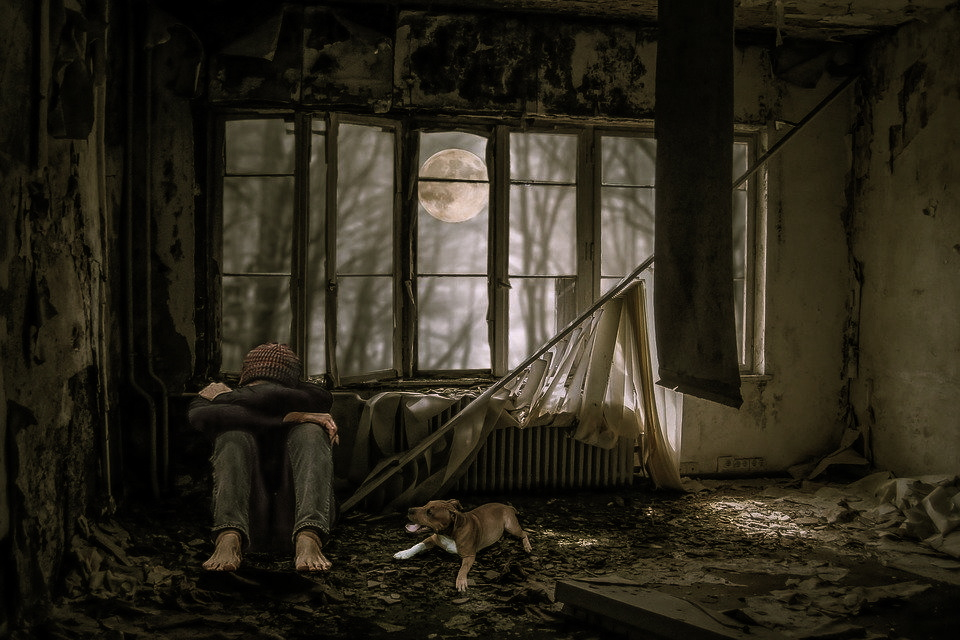