Once again, I glue myself to a promise I cannot keep.

I picked Nick up today to go to the market. His turquoise t-shirt is filthy. Same brown pants, New Balance tennis shoes (like his father’s) and weirdly stretched out hoodie that is about a foot longer on the right side where he carries his cigarettes and keys. Today, his appearance makes me angry, not at Nick, angry at the universe.

Today he’s sluggish and uncommunicative. He doesn’t answer when I talk to him. He is pushing his right leg against the passenger door with a force that I fear will send it flying open as we drive.

He keeps asking to go to McDonalds. I surrender control of the car radio, put on my earbuds and try to drown out the nineties music rotation where he stays stuck, never to move forward. He calls messaging on his computer AOL.

At the market he stands in front of the endless cereal aisle endlessly. “Nick, just pick one!” I bark as a fellow shopper glares at me because I sound so mean.  He decides he doesn’t want cereal and we move to the frozen entrée labyrinth where I just know my head will explode. We argue about decaf verses caffeinated coffee until I give in. I put my foot down at stevia rather than the horse-feed size bag of white sugar he wants. I distract him with the promise of fresh berries and send him outside to smoke while I get in line and pretend I’m like everyone else. I see the lady from the cereal aisle, and she rolls her eyes. I accept the implied label of “terrible mother” because to explain would take a lifetime, and anyway, maybe she’s right.

I walk out of the store and he is nowhere to be found. I’m used to that. I schlep everything to the car and load it all myself, sweating. My phone rings. “Hey, Ma, where are you?”

“I’m at the car, Nick, perfect timing as usual,” sarcastic and resentful. “Please get over here so we can go. I have things to do beside cart you all over town.” I am a terrible mother.

“Well, why don’t you just come pick me up at the entrance. I’ll be over here.” He says pleasantly.

And then the thing opens up inside me that I try so hard to keep locked up.

In the car I rant at him. I criticize him for eating unhealthy food, drinking too much coffee, needing to lose weight, manage his life, get a job (for God’s sake…what is wrong with me?) Out of the corner of my eye I see he’s pressing his arm as well as his leg against the car door, the pressure is palpable. He doesn’t say a word.

By the time we arrive at his apartment I full-on hate myself. The groceries are in the back seat, in the trunk are two chairs I bought for him at the Goodwill. He opens the car door before I have come to a full stop, grabs his bags from the back seat and turns. I call out, “Hey, wait, what about the nice chairs I got you?”

He says angrily that he doesn’t want the chairs and walks away. It was a yell. He rarely raises his voice. What have I done, with my weakness and my pain? I have hurt him.

I pull out of the lot and park on the side of the road where I cry uncontrollably for a while. Once again, I’ve lost my composure and taken my twisted, fucked-up anger out on the person who deserves it least. I make a vow to myself that this will be the last time.

Fifteen minutes later I am back at his apartment, easing into a parking place. It is hard to juggle the two chairs along with the McDonalds bag and large caramel frappe I bought for him. He opens his door and says “Hi, Ma, ooh you brought me McDonalds?”

“Yeah, and look, don’t you think these chairs will look great at your table?”

As he dives into the food, I begin my rehearsed speech. “Nick, I owe you an apology. I really lost it, I guess I’m pretty stressed out. I didn’t mean those things. I love you very much. I’m so sorry I was mean.”

When he finishes eating, I clear it up. “Really, Nick boy, you understand that sometimes I just get overwhelmed. You didn’t deserve that. I’m really so, so sorry,” choking back tears now, I roughly swipe my fist across my cheek.

He smiles at me and says, “You know, Mom, I really don’t even remember what you’re talking about.” 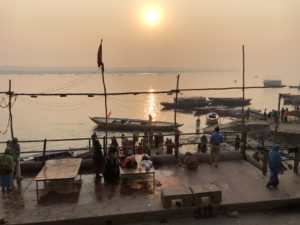 Pilgrims come from all over India to bathe in the Ganges River, which is said to wash away sins.