Devils In The Details

I worry about things like spontaneous combustion. I also worry that the laws of gravity might be randomly suspended and I’ll suddenly find myself hurtling through space. These are real fears, fears that strangle my thoughts in the middle of the day when I’m doing something as mundane as sorting the recycle. There’s no precedent for them, I just carry the images in my mind. They’re campfire stories that my worried brain tells me.

I worry about normal things, too, like the monthly budget and whether I’m getting enough exercise. While these worries have nothing in common with bursting into flames or being unexpectedly hurled through uncharted skies, they are something I can easily dispel on my own. If needed, I can ask for help. However, a sudden loss of the earth’s gravitational pull on my singular self is not a topic easily broached. Suffice to say my more conventional worries are more easily understood.

I’ve had these odd concerns since childhood, and their disturbing grip on my consciousness hasn’t loosened yet. If anything, they’ve intensified as my mental illness has continued to develop. Until my meds were adjusted a couple of years ago and linear thinking became a more tangible experience, I was nearly crippled by a form of postulation I called the “What Ifs.” What if looking out the window meant I had to jump? What if people could read my mind and steal my thoughts? What if I touched a door handle and some stranger copied my fingerprints?

Everything became a doomsday scenario, seemingly unavoidable, regardless of my intervention. Things happened in the What If Configuration as a result of my simply entertaining the question. My thoughts created the reality. I blamed myself for natural disasters and the deaths of celebrities. Everyone was in peril because of my thinking. Every bad thing that happened was my fault.

I live with schizophrenia, a formal thought disorder defined by illogical or disorganized thinking. Schizophrenia is classified as a psychotic illness. As a symptom, psychosis is an abnormal state of consciousness in which the higher functions of the mind are disrupted. It typically includes delusions (false ideas about what’s taking place) and hallucinations (seeing or hearing things that aren’t there)—fertile grounds for the What Ifs.

The symptom of psychosis can slip through the barrier provided by my monthly antipsychotic injection, especially when the time-released benefit is nearing its end. Familiar delusions appear in my mental periphery, and I’m faced with a charcoal-smudged shadow of a former reality. I try to employ a third person perspective to the experience, but I usually need to discuss it with my therapist to get clarity when I’m questioning my perceptions. Sometimes I’m just afraid—afraid of what I’m thinking, what I’m seeing, and of the consequences of slipping through a psychotic shiver. Does it mean I’ll be sick one more time? Will I have to go to the hospital? Will I have to ask my friends to believe in me again? How much memory will I lose? How much ground?

When I’m stable, the What Ifs feel limited to questions of social awkwardness and everyday insecurities. Concerns like what if I’m too fat, too poor, too weird? It’s been suggested by my friends that I simply be my authentic self and allow others to make up their minds about me. The temporary distortions are easily assuaged. That doesn’t mean that the crossover of psychosis is inevitable or that my behavior is going to be chaotic. It just means that I need to trust the work I’ve done over the years and let the outcome be what it is.

I’m still cautious for those four or five days when the medicine’s efficacy wanes, however minimal. Symptom breakthrough is a very real possibility, one I can attest to. Even my psychiatrist agrees with me, with the added caveat that “there are tradeoffs,” that the overlap is natural, and that I’ll come out of it likely unscathed. For full-blown psychosis I’d have to stop taking all of my meds, and that’s not going to happen. I’m too comfortable worrying about fireballs and falling up.

One persistent delusion, though, it that the underworld’s unbuckled and devils walk among us. There are certain tells that each of them has in common, certain quirks and earmarks. When I was ill, I hunted them with impunity. I became somewhat adroit at ferreting them out. They really aren’t as clever as all that, with their camouflage and fakery. I’m able to tell the difference now. Not every person with a tattoo is a demon, but every demon has a tattoo. And everybody has demons. 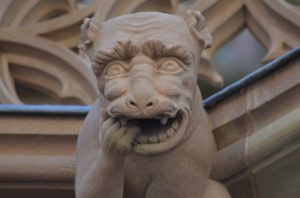