Today is my birthday and I find myself reflecting on the past. A childhood on the rim of the spectrum, communicating my day-to-day needs through a garrulous roller coaster ride of dinosaurs and Batman, never quite grasping another way to express my emerging emotions. Love was paint and epoxy. Necessities were a plastic model kit.

Adolescence and teenhood came and went in a flurry of rock and roll and OCD. The Dark Knight and triceratops were replaced by guitar heroes and hand washing. The hard and fast realities of autistic behavior started softening as art school loomed in the not-too-distant future. Unfortunately, it was then that all hell broke loose and psychosis took over. My first trip to the hospital was in my Junior year. I was sent home after an evening’s stay with a handful of pills and no idea of what had transpired or why. I was just another “crazy college student,” an albatross around the institution’s neck, an ideological assassin on the loose.

Post-college cool-down devolved into living spaces painted floor to ceiling black, windows boarded up, dreams derailed. Schizophrenia had settled in. Voices, visions, paranoia. No more model kits. A lot more loud guitar. The nomadic life of a pop musician, responding to the romantic underbelly of urban life, all the while navigating through one psychotic break after another. I lived in a twilight of nightmare surreality, which subsided soon after I got married.

The stability of that relationship added a dimension of normalcy to my otherwise chaotic life. Our interdependency created a world where I could share my creative self without concern for rejection. We had rules, something lacking since my dinosaur days. But over time the seams began to show, and psychosis seeped back into my life. I was under surveillance—at first by aliens, then by secret police. My mail was being tampered with. People at work were stealing my thoughts. I had to leave my job. I was under attack and unemployed, paying hospital bills with the last of my father’s meager inheritance. I couldn’t connect with the fact that he was dead. I was certain that I was, too. Then came the undead, demons tracing my every step.

At first I thought I was on their trail, keeping notes in my journals about their whereabouts. I studied their habits, knew where they nested, where I’d be sure to find them. Often on my walk home, sometimes on the bus. In turn, they followed me to therapy and waited for me to leave the office so they could return to their tracking. Many years of this cat and mouse game, culminating in panic attacks and trips to the ER.

Eventually I lost my resolve…that’s when I turned to darker thoughts. Life seemed too hard to shoulder. I knew that I had caused the death of a famous pop celebrity and I confessed to the admission’s nurse that I had been the perp. She let me in. I stayed in the psych ward for the better part of three weeks, learning about myself and my situation in group therapy and one-on-one with a counselor. The doctors prescribed meds that they thought would work well for me and they were right. I began to feel better and my perspective on living became clearer, less scattered. Life continued to improve—until it didn’t.

The intrusive thoughts returned. I responded to them through psychosis until my symptoms grew to be too much for me to handle, so I sought help from my friends. They drove me to the hospital again. They sat in the waiting room again. This time, however, things got worse. After I got home I ran from the demons, fell and caused a concussion, got lost for a few days, and wound up in the psychiatric hospital. More therapy. More medication adjustment. I was finally stabilized and set free in time for Christmas. A dear friend came over to my apartment and cooked a dinner for us. As the new meds began to take hold, my thinking became cohesive. My outlook improved exponentially. Fear had subsided. The demons were gone.

I have a different perspective on life today. I’m less concerned with being normal and more enthusiastic about the integration that medication and wellness has afforded me. My self-conscious behavior and subsequent social awkwardness seem to have waned; life feels more easily manageable. My confidence has returned to a degree that I felt compelled to meet new friends, and with new territory to explore, I feel inclined to take chances that I wouldn’t have—or couldn’t have—when I was living in psychosis. 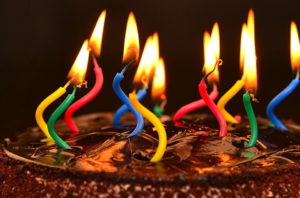