I am walking. It is the big city, New York City. The streets are dusty with cold. Multi-faceted lights pepper the darkness. The force of this place is like a current, maybe a river, maybe electricity. I’m alone, looking at the people around me. I am not afraid. It’s late at night, but I don’t worry about things like that anymore. I have other priorities.

Ahead of me is a girl with fashion model-like clothes, swishing, poignant, making a statement. She breezes away. So many people are talking out loud. I always check to make sure they have earbuds, so I know that they are on the phone. A young black man, angry, defending himself: “My mother says no, I can’t make it happen, but I know I can do this.” A strong-legged girl shouting into the night: “If you can’t deal with my feelings then just forget it.” Greek tragedies played out on the cement for us all to see. No one is concerned about privacy. I’m here now and this is what is happening, you can listen in or not.

I walk with intent, I always do. And then I see him, just a half-step ahead of me: “Yeah, well, no, you will never get it. You fool. You know nothing! I can’t even explain it to you.” The boy is about twenty, disheveled, with light-colored, questioning eyes. His clothes are dirty. There are a lot of patches sewn onto his backpack, one says question authority but the au and the ity are blackened out. Question thor. He saunters like there is carpet on the ground.

I walk with Half-Step Boy (I’ve named him, now) and observe. No ear bud on the left side. Hmmm. I saunter to the right to check. Nope. Nothing there either.

Ah, for the time when we knew that people talking out loud to no one were the crazy ones.

So now I am sure. No iPhone, no ear buds, no electronics. Just the electrical surges he keeps in his head. A woman passes with a large pregnant belly. I absentmindedly put my hand on my own and think “who does she have in there?” Is it a soft wonderous girl? Or maybe a beautiful boy who veers terribly off course and loses his mind. I have one of those myself. That’s my story.

You see, that is the origin of my investigations, my surveys; it’s my own crazy son. The one who was born perfect and then migrated away from our world into his own. I have to figure this out. I am convinced that I can do it. After all, I grew him. Who would know better than me? He is 33 now, and thirteen years into this odyssey and I still think it is a puzzle I can solve. That is because I am Mother.

I continue walking behind Half-Step Boy. I am compelled. I summon the genetics of his mother and tell her that I am here. I am beside him. I hear him. There is nothing I can do, but I am next to him, trying to carry some little part of his burden. Her burden. Suddenly he screams, and people stare. The noisy night shatters into silence for a minute. I can see it disperse into the air: his mind, his agency, his future. I want to jump up and catch it, return it to him, but I know that is impossible.

So I walk, one half-step behind, and gather the detritus, because I know it is not garbage. It is his soul.

What a mystery, this thing, mental illness. But what exactly is the critical issue? Just how horrible it is? How ugly, how dehumanizing? Or is it something more intricate, more profound than that? A thread throughout the historical narrative of this disease is that the afflicted one believes he is talking to God. Or God is talking to him. Along with the humorous tin foil hats, and the messages from the television, comes the very serious component of God. Delusions of grandeur or confounding truth?

As I move carefully through the days or lie, sleepless, staring at my bedroom ceiling, I am plagued with one question. What if it is true?

What if it turns out that they are the chosen ones, tuned in to a higher, more articulated, frequency than we ordinaries can even imagine? In ancient civilizations people who behaved eerily like those we now label schizophrenic were more often regarded as visionaries. Shamans. A circle was drawn around them where they could live, respected, within the existing society to which they weren’t suited. What if it turns out that they are communicating with God? What if, in some final irony, we discover that they aren’t afflicted, but rather, celestial? Oh, I hope so.

My son is six feet, two inches tall. He has his father’s broad shoulders and chiseled profile, a noble nose that recalls my grandfather. His eyes are an inky, deep brown against olive skin. When he smiles it fractures any darkness, it changes the world. He has cartoon-like dimples. These days he spends most of his time watching cartoons. He stays in his apartment with Sponge Bob Squarepants and The Simpsons. He loved them when he was a boy. Then he became a man and joined the legions of those who live with schizophrenia, and I joined the Mothers. 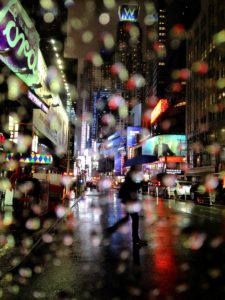 Learn more and read Miriam’s book, He Came in with It.