Among the jobs my father had when I was little were sign-painter, cartoonist, copy editor, and pyrotechnician, the latter involving the design, engineering, and care of firework displays. His busiest season for pyrotechnics was summer, and the busiest event was on the Fourth of July. Fireworks shows usually took place on the county fairgrounds or at the sports arena. I was too young to understand that the day’s celebration was meant to commemorate our country’s independence, but I understood that my dad was responsible for the brights lights and loud booms. Considering that I lived in a world of my own, replete with sights and sounds that manifested sparkles and colors by the nature of my young life on the spectrum, that was enough for me. While the rest of the year held little intrigue if there wasn’t a parade or Frisbee in sight, Independence Day always delivered.

As I grew older, movies took the place of fireworks, and I gravitated toward summer blockbusters for my bombastic entertainment. I would push past my symptoms of OCD and my nascent agoraphobia to sit in a roomful of strangers and witness the spectacle of space battles or the adventures of superheroes. As time went on, I became something of a cinephile, the rocket’s red glare replaced by the cozy crepuscule of the cathode ray tube and the videodrome. I could be alone, isolated from others, which my phobias informed me was the best of ideas. Years later, my therapist would suggest otherwise. I soon learned that it was, in fact, a jail cell of the mind.

Like so many others living with mental illness, I lost my autonomy to the symptoms of my diagnosis. Schizophrenia doesn’t play. It disassembles. Reality breaks apart like the tendrils of an aerial fireworks display. There’s a flash of an idea, a burst of activity, and memory that fades into darkness. I lived in that chaos for years, praying for freedom and never finding it. I was uncertain of therapy and afraid of medication. I didn’t want to lose what little liberty I thought I had. My life had become defined by my diagnosis. I felt trapped, at times under siege. Hallucinations, both visual and auditory, boxed me in. Stigma pinned me down.

Eventually psychosis delivered the killing blow, or very nearly. I’d gone walkabout, driven by my voices and broken memory. I wound up in the psychiatric hospital again, for the last time. There, they dialed in my meds, introduced some new ones, and discharged me with a healthy prognosis and a sliver of hope. Medicine and therapy afforded me genuine freedom from my illness, as long as I kept up my regimen. Eight daily pills, one monthly injection, and therapy sessions once a week. I’ve gotten it down to a rhythm that works, a routine. It’s what I have to do to maintain my deliverance from psychosis. It can be hard, but the rewards are worth it.

Life is challenging once again, but in a different way. The arrival of COVID-19 has seen the global population on lockdown, practicing social distancing and taking other precautions in order to stay healthy and survive this era-defining pandemic. Anxiety is widespread, and amplified for those with mental health concerns. When it comes to the novel coronavirus there is, of yet, no end in sight. A vaccine is a hope for the future. In the meantime, we’ve embraced the independence that technology provides us. Video chats have replaced the face-to-face connections of only a few months ago, but they’re a freedom from loneliness and isolation. And we can always text or call a friend, something we may have been doing all along, but with new meaning, now. Enlarging our network of people we know may take more effort now than before, but the dividends are so worthwhile. Individually and collectively we have gotten creative to defeat the isolation blues.

Somewhere in storage I may have videos of my dad’s old fireworks shows. If I knew which box to look in, I could relive those childhood moments. Instead, I’ll probably order in a pizza, grab my teddybear, and watch Independence Day, like I do almost every year. The Fourth of July is his birthday. I tell him all the hoopla is for him. Secretly, I know some of it’s for me. 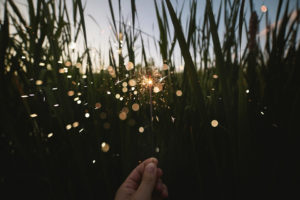