When I first started my current regimen of meds, I was made aware of the possibility of certain side effects, including, but not limited to weight gain, restlessness, and a decreased sex drive. What I hadn’t counted on was the diminishment of my emotions. I can’t remember ever experiencing them. I chalk that up to schizophrenia’s built-in memory loss. I’ve scrabbled around my mind searching for emotional components to little or no avail. I’ve managed to cobble together laughter, which feels good when it comes, but crying is something that I fear I’ve lost forever. I can’t tell if that’s genuine happiness and a loss of sorrow, but too often I feel like a broken Pierrot.

With my meds I’m less animated and somewhat lethargic. I’ve discussed this with my psychiatrist and he assures me that it’s a reasonable tradeoff for my condition. So I could be effervescent and crazy or balanced and stable.  Not much of a choice, really. And while stability is important to me, the flattening of my feelings is not. Of late, I’ve only been able to feel one emotion—despair.

I could chalk this resignation up to the COVID lockdown, but that’d be too contemporary. I could blame it on global warming or the current state of the nation, but I’m not that politically inclined. It’s more an awareness of the loneliness inherent in schizophrenia, that I’m one in the 1.1% of people in the U.S. living with this disorder and its stigma. I grew up with the same negative stereotypes of mentally ill people as everyone else. It affected me adversely when I first confronted my diagnosis. How could that be me? Was I simply a caricature of a pathetic loser? Had I become a statistic?

I researched schizophrenia with everything at my disposal. I read the DSM-IV. I read memoirs and biographies. I wore out my keyboard trawling through Wikipedia, Schizophrenic.com, NAMI’s website, and more. I was doing what my stepmother had instructed me to do by example. When she was diagnosed with pancreatic cancer, she researched the illness and conferred with doctors to discover whatever she could about it. She died nevertheless.

Through reading, I gleaned a lot about the present-day stigma against mentally ill people, how far back the ridicule and misunderstanding went. It’s pervasive, like weeds in a garden, choking the life out of the flowers, the light out of the eyes of neuroatypicals. Pop media would have you believe that every mass shooting is the handiwork of a schizophrenic, when numbers show that a person living with schizophrenia is more likely to be the victim than the perp.

I’m not consoled by statistics. I am, however, overwhelmed by defeat. It seems that all I can focus on lately is hopelessness, either how to combat it or how to subsist within its limits. Usually I focus on hope and solitude, believing that this affords me some solace. But I sense that an outside pressure is at odds with my internal fortitude. I’m losing my optimism. I want it back.

I’ve got solitude by the bucketload, but without comfort accompanying it. If I exhibit any hope, it’s in that I can openly talk about its lack in my life. I talk to my therapist and uncover layer upon layer of obstacles that I need to surmount if I’m ever going to regain my outlook on life. I talk with a trusted friend or two about the pitfalls and conclusions that I’m dealing with of late, and they commiserate and offer responses based on years of friendship. But none of it gets me any closer to closure.

I watch shows and feel more alone than ever. I listen to songs, read books, allow myself to escape or discover, but without success. So I write and pray that my words might reach someone in a place similar to mine, that my prose brings them a sense of belonging, something akin to solidarity, a connection with another person. Because that is ultimately what I’m lacking. That’s at the root of my hopelessness.

Schizophrenia is a lonely disease. It’s hard to comprehend. Society tells us to avoid mentally ill people, almost as if their illnesses are contagious. Only the courageous will befriend us, whether they themselves are mentally ill or not. Fragmented thought and unpredictable actions are two characteristics of schizophrenia which tend to keep the uninitiated at bay, yet even those accustomed to the erratic behavior and surreal conversations of the untethered mind can sometimes retreat from the challenge of communication, leaving the mentally ill to fend for themselves. This is in no way anyone’s fault; it’s just a way that things can be. I’m pretty sure I can get back to solitude and hope. It’s only a matter of time. 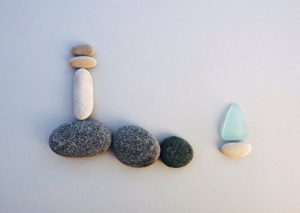