My tremor went from mild to noticeable to fairly exaggerated. My gait was measured in baby steps and I walked in a stilted lurch like Frankenstein’s monster. The staff neurologist at the hospital said I was exhibiting symptoms of Parkinson’s Disease. It runs in my family. He wasn’t influenced by this knowledge; I didn’t share it with him until after the consultation.

After being discharged from the hospital, I worked with physical therapists to regain my balance and build up some strength, but the symptoms continued. I made an appointment with a neurologist my psychiatrist knew, and I underwent more testing for Parkinson’s with him. The main test involved an injection of a radioactive isotope which helped the doctors ascertain the source of my symptoms from a neurological standpoint.

In order for the scanner to read my brain activity accurately, I had to stop taking my meds for the better part of a week. I voiced my concerns with my psychiatrist about going off my meds because I’d been taking them successfully for so long. I had read examples from patients who were on medications similar to mine who, for various reasons, had ceased taking them. The adverse experiences they recounted were nothing short of forbidding. Their testimonies seemed exaggerated to me, but I learned later that they were not. Just days into stopping my meds, I felt apprehensive about the whole endeavor. I wanted to turn back and avoid the brain scan, but I persevered. I had to know what was going on. I’d worried unnecessarily that I was dealing with Tardive dyskinesia, a disorder that results in involuntary movements, occurring in some consumers as a result of long-term use of certain antipsychotics such as chlorpromazine (Thorazine).

Worry had taken over my disposition. By the time of the appointment, I was definitely concerned for my mental health, having become depressed and anxious, feelings I hadn’t experienced to such a pronounced degree since beginning my current med regimen. Thoughts of self-harm seeped in. I wasn’t drowning in them, but I wasn’t on the solid ground I’d grown accustomed to either. I felt growing hints of instability. It was as if I had never taken medicine. I felt like an animated litmus test, an articulated “before and after” demonstration. I couldn’t wait to break into the little pillbox in my pocket and gobble up a tiny handful of the magic beans. But first, the brain scan.

To get an accurate read of the drug injected into my bloodstream, I was strapped to a table, my limbs immobilized and my head held firmly in place. I couldn’t move, save for breathing.  The nuclear medicine imaging is designed to differentiate symptoms related to Parkinson’s disease from the relatively benign condition known as essential tremor.

The scanner’s cameras inched their way around my skull, across my face, and back again for the better part of an hour. I found myself practicing a deep breathing exercise that my therapist had taught me, concentrating on the air in my lungs and the sensation of my belly rising and falling in a slow, deliberate rhythm. Time seemed to pass quickly once I’d gotten used to the situation.

The test results came back negative, meaning that I didn’t have Parkinson’s. My odd muscular movements could be attributed to side effects of one of the meds I take. The name of this condition is Parkinsonism, a combination of movement abnormalities similar to Parkinson’s disease. Disconcerting enough, but it wasn’t fatal.

Being resigned to muscle stiffness and tremors was something I would just have to adjust to, like the weight gain and low libido that have been a steadfast fact of my life due to the side effects of psychiatric medication. Another fact I have to face is the trade-off between a life of psychosis unmedicated, versus taking medication and cultivating stability, an experience that was demonstrated to me during the week running up to my procedure. I now have a vantage point from which to view my recovery. The experience was brief but effective.

For most of my life, I lived with unmanaged schizophrenia, believing that I was “normal” and that my reality was no different from the generally accepted one. After years of therapy, I came to believe otherwise, learning to accept my fears of medication, fears based on a negative experience with meds when I was a senior in college. Having so recently lived otherwise—however briefly—I can safely say that being med-compliant is perhaps the single most important decision of my life. 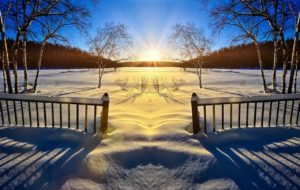