A Different Kind of Lonely

It’s not like I haven’t been here before. I’m all too familiar with this feeling. Regardless, I don’t like it one bit. It’s disturbing. Defeating. Every so often, I come face-to-face with my mental illness.

It’s as if the reality of my diagnosis is the only thing I can think about. It wakes me up in the middle of the night. It catches me off-guard most days. I can’t escape it. I have schizophrenia. There is no cure.

It’s a thought disorder and it crowds my mind. It can be controlled to some extent with medication and therapy, but sometimes that’s not enough. Meds have their drawbacks. The side effects, obviously, and the social stigma that comes with being medicated. Jokes about being off one’s meds are not only insensitive, they’re hurtful.

Moods are nearly nonexistent. Many of my emotions are flatlined. For example, I have empathy, and for that I’m grateful, but the lack of true sorrow evades me. Frustrating, because I have memories of sadness and those cathartic tears that rinse away the pain. It’s human, a natural response to difficult situations, but to pass as someone without a crippling brain disease, I have to accept the tradeoff of meds for emotions. It doesn’t seem fair. It wouldn’t hurt so much if every waking minute was sunshine and ecstasy, but that’s unrealistic.

Another emotion I experience is shame; ashamed for being schizophrenic, having a mind cluttered with thoughts that don’t align with the Common Reality, behaviors that seem erratic and unpredictable. A broken mind.

On those days when therapy and medication are working at peak efficiency, the sense of seamless integration into society feels satisfying, something I can rely on to get me through the day without incident. But I’m so accustomed to a life lived in psychosis that reliance on this new medicated normal seems unfamiliar, like something I can’t fully trust. The edges of my reality fold in on themselves creating a stopping block of confusion that I find difficult to express through speaking. So I make art. I create. Creativity is, for me, a tangible paradigm best used to connect with others. To attain the seemingly unobtainable—a connection with another person.

Schizophrenia is a disease of loneliness. Not only does the world feel profoundly confusing, but social interactions appear forced and colorless. Life seems devoid of meaning. When no one thinks like you, communicates like you, and the normal, accepted ways of society feel like extensions of a culture unhinged, nothing feels safe anymore. When there’s no predictability, it’s hard to form relationships or explore the possibilities of love. It’s hard to do almost anything that requires interaction with another human being.

I keep my world small, contained. That way I never lose sight of the social cues of the normal world. When I talk with my therapist I allow myself to speak openly and honestly about whatever’s on my mind. I explore the words and watch as they tumble out and form clusters of sentences, pockets of meaning. I talk about things that I wouldn’t share with anyone else. It is the safest place I know. I’m not judged, nor am I taken for granted. I’m not the court jester or the castoff lunatic. There’s dignity expressed in my manner and self awareness. I feel seen. It’s a feeling I would like to have with every person I meet, but I’m too timid and shy. Self-stigma gets in the way.

Outside of therapy, the only communication I have where respect and acceptance are prime real estate of the heart is with my sister and a few trusted friends, some with their own mental health conditions. We can share stories with each other about the side effects of our meds, and social interactions or personal stumbles and recoveries. We shore one another up when we run aground.

As frustrating and baffling as these daily reminders can be, I still prefer the conundrum to the doldrums. I realized through therapy that this journey will always be a solitary one, that the haunted feeling I have about my brain disease will likely be on a continuum, that the sense of presque vu may be permanent, and that the feeling that I’m about to unravel my private mystery will always be just out of reach. Until then I’ll be engaged in my usual daily practices of researching my condition and imitating aspects of normal world behavior to blend in. Because I don’t feel right about feeling alone. 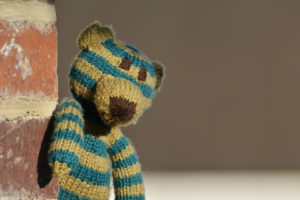