The Trauma of Psychosis

Every twenty-eight days I receive an injection of an antipsychotic. For the past three years it has been the most effective medicine I’ve used to control my schizophrenia. There are many advantages to taking this medication, not the least of which is the “one-and-done” application. I don’t have to remember to take  a daily med to reorganize my disordered brain.

Over time, I’ve grown accustomed to the rhythm of the medicine’s efficacy, but somewhere around the twenty-fifth day I start to notice a slight difference in the way that I relate to the world around me. I tend to feel disconnected, if only for short increments of time. This leaves me open to being triggered if I’m not careful. I have a prescription for an “as needed” med that I can supplement my three-day window with, but I usually forget that I have it at my disposal. It would make days like the one I had last week a lot less stressful.

On my way to the clinic where I receive my injection, I spotted some geometric characters out of the corner of my eye. In years prior, when I was very ill, these seemingly disparate symbols spray-painted on the street and sidewalk would take on a meaning that my thought disordered mind would interpret as threatening, as proof of demons surveilling me, or as a warning that I’d crossed into their territory and was in harm’s way.

The clinic that I go to is only one block from the bus stop, but that’s plenty enough space to discover the symbols I believed were left exclusively for me. No one else on the sidewalk seems to be aware of the importance of the images or the gravity of the situation. On the other hand, I become hyper-vigilant. I need to protect myself. I don’t become psychotic, but I respond to my experience as if I were.

PTSD, by definition, is a disorder in which a person has difficulty recovering after experiencing or witnessing a terrifying event. Once triggered, memories of the trauma can be accompanied by intense emotional and physical reactions. Psychosis is a severe mental disorder in which thoughts and emotions are so impaired that contact is lost with the real world. Since the reality of the thought disordered mind is as real to the individual living through it as a common reality is to those who are not, it stands to reason that the events which cause the fight or flight response could act as a trigger for post traumatic stress. That’s where I found myself that afternoon.

On the bus ride home, to the annoyance of the driver, I stumbled in the aisle while attempting to pay my fare. I tried not to say anything, but I was soon made aware that I was talking to myself, muttering about demons and issuing “End of Days” warnings. I’d seen a few symbols before boarding the bus, and saw even more when I disembarked. The images were stronger than my resolve, and I nearly caved. I had to wait for my transfer at a stop near my therapist’s office. I thought about therapy and how it helped me sort out the tangled mind that trapped my sanity in its brambles.

Treatment for both post traumatic stress disorder and psychosis include trauma-focused psychotherapy and medication to manage symptoms. Since my time in the hospital in fall of 2017, I have experienced a marked change in the ways in which treatment has helped to quell my nightmares and my knee-jerk reactions to negative stimuli. So days like the one I described above are no longer the norm as the they once were. I lived in a state of constant terror until most recently. The idea of demons became concretized and I began seeing them everywhere in my day—on walks, at the grocery, at work. Anywhere I might meet another person. Defeating them became an obsession.

Symptom breakthrough can be challenging, but the subtlest hints of psychosis can ratchet feelings of anxiety and dread in paralyzing ways. The sliver of a tear in the fabric of reality leaves the mind open to sabotage. I’ve worked hard in therapy to unravel the maze of madness that has been my life, and I’ve only recently found the right medication to help clear my mind and align my thoughts with those of the common reality. It stands to reason that my reaction to the trauma of being out of my mind for most of my life would cause terror in my heart today. Hopefully my support network and I can make sense of it all and keep me in my lane. 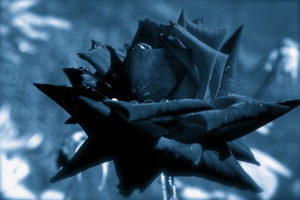