Are you a boy or a girl?

My nine-year-old daughter and I were recently staying in a cabin out in a beautiful, wooded area along Hwy 1 in California. The first day we were there, a couple little kids came up and started talking to us, as little kids do with strangers sometimes. The youngest, maybe four years old, started telling me random stories of her adventures. The last thing she said at the end of her rambling was “Are you a boy or a girl?”

I had been asked directly if I was a boy or girl many times in the past 15 years. Mostly by children, but surprisingly by some adults too who either had no filter or familiarity of or education around gender. But it had been nearly a decade since I had even worried about not “passing”. Although during Covid I have often been mistakenly addressed with female pronouns. With my scruffy face hidden by a mask, I guess it makes my high voice and longish hair stand out as gender identifiers.

Here is what I wanted to say in response to the child who had asked me the question:

“Gender is a bit of a complicated journey for some. A lot of people are completely comfortable in the gender they were at birth while others know that they are in fact the opposite gender of which they were born. And there are a growing number of people open to the realization that they feel comfortable as both genders, or as neither.

When I was transitioning, which started around 2006 in San Francisco, the communities of my peers, and coworkers, strongly leaned toward the binary. Transitioning meant going from living as the gender we were at birth to living in the opposite gender. While I was confident that my preferred gender was male and that I wanted to be addressed with he/him pronouns, it was hard leaving all the aspects of what people see as traditionally female traits behind. But all I saw around me were examples of how we were supposed to become more macho if transitioning from female to male, or extremely feminine if transitioning from male to female.

The main goal of sticking to the binary at the time was so we could pass. This lessened the potential for verbal, or physical, abuse while walking down the street, using restrooms, going to work–or just being alive in someone else’s world who didn’t agree with who we were. While I have a mental illness which was triggered to high alert by this every day, I can imagine that even someone who does not have a mental illness would find the weight of ongoing anxiety and fear of what would happen when you walked out the door unbearably heavy as well.

Almost 15 years later I’m finally just me, which is a fluid experience from moment to moment. While I want to be addressed with he/him pronouns and acknowledged as male, I have been able to let go of the image I chased for so long of what I thought a man was supposed to be. I wear makeup or nail polish when I want, wear clothes that are comfortable, and I grew my hair out longer (first time in over 20 years I didn’t have a buzz cut!) and fix it in buns and braids (which also is usually accompanied by a variety of barrettes my daughter likes to add in). And instead of keeping my hands shoved into my pockets and trying to walk as manly as possibly, I let my hands wave around as they feel and walk naturally.

While self-identifying as non-binary has been around for centuries, asking someone their preferred pronouns has just recently began to gain momentum. By asking someone what pronouns they prefer, it not only helps to prevent potential emotional distress, but it is a way of showing that you respect the person and their expression of their gender. If I were asked my preferred pronouns along with my name the first 40 years of my life, I think it would have dramatically lessened the stress, depression, abuse and anxiety in my life and allowed me to free myself from the box I had put myself into. Thankfully, today, I can say my name is Sean and I prefer to be addressed by the pronouns he/him.”

But that is not how I answered the four-year-old that asked me if I was a boy or a girl. I answered with: “I’m a boy.” Which feels 100% accurate and comfortable for me. At this point though her mom jumped in the conversation and anxiously said that her kids were not used to seeing men with earrings and that is why her daughter was asking. But I just looked at the little girl, took my mask down, and smiled as my daughter squeezed my hand in support.

Afterwards, my daughter asked me if I was okay with what the kid had asked me. I told her of course I was! And that it was honestly refreshing for somebody to directly ask me, in their own way, in this case from the perspective of a young child, of how I want to be seen. How I was comfortable presenting myself. And while my daughter and I know who I am and understand the fluidity of gender, I hope that I disrupted that little girl’s, and her mom’s, perspective on gender and of what men, and fathers, are supposed to look like, sound like and how they are supposed to act. 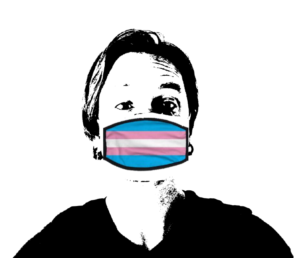