But You Don’t Look Depressed

I, myself, was shocked to learn that not only was my doctor on the same course of anti – depressants as I was, but that my tutor and friend, a PhD graduate and one of the strongest people in my eyes, was a long – term sufferer of severe depression herself. Yes, as difficult as it may be to believe, contrary to popular belief, sufferers do not walk around with a sticky note attached to their head saying ‘Don’t look at me; I’m one of the crazy ones’.

Once depression had taken a firm grip around my life, I spent a couple of years house bound with the exception of my trek out for weekly therapy. In time, I gained back some self-confidence and became interested in venturing out into the world. Small steps though.

When you educate yourself about your diagnosis, physical and psychological, you become empowered by knowledge. You can see through the snide remarks from the no-offense-but-people. When you react from strength, not trepidation, you’re helping to erode the fear, misconceptions and stigma that are rampant in our local and global communities.

My years of struggling with PTSD and major depression came from a very traumatic moment in my younger years, yet many people would never look at that big picture when I used to try to share my story.

My father was dead at 51, a casualty of the manic depression he had fought for years. The New York Times, citing its suicide policy, declined to print his obituary. He lived in a time when mental illness was an embarrassment for families and a weakness for men. For Dad it was a crushing blow. He had left Harvard early to join the marines, and flew dive-bombers in the Pacific. He came home from the war to a different world, a wife, two small children, no money and bipolar disorder. He prided himself on his toughness and never discussed his demons. 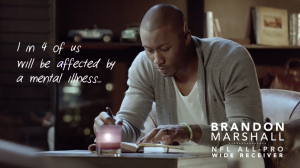 Upworthy – Too Many Men Avoid Talking About One Big, Difficult Subject Until It’s Too Late

So now I hold my daughter tight. Let selfish be a word of the past and warrior be our future. Those who fight mental illness are warriors battling against chemicals that are twisted and turned the wrong way. Let us continue.

I feel like I am strong enough now to share this with you. My hope is to bring more awareness to others, start conversations, and inspire hope to those who are suffering. Whoever you may be, I want you to always remember that you are loved and you

END_OF_DOCUMENT_TOKEN_TO_BE_REPLACED
Previous 1 … 9 10 11
If you or someone you know needs immediate help, please call the National Suicide Prevention Lifeline at 800.273.TALK (8255) or contact the Crisis Text Line by texting BC2M to 741741.
Subscribe To Our Newsletter